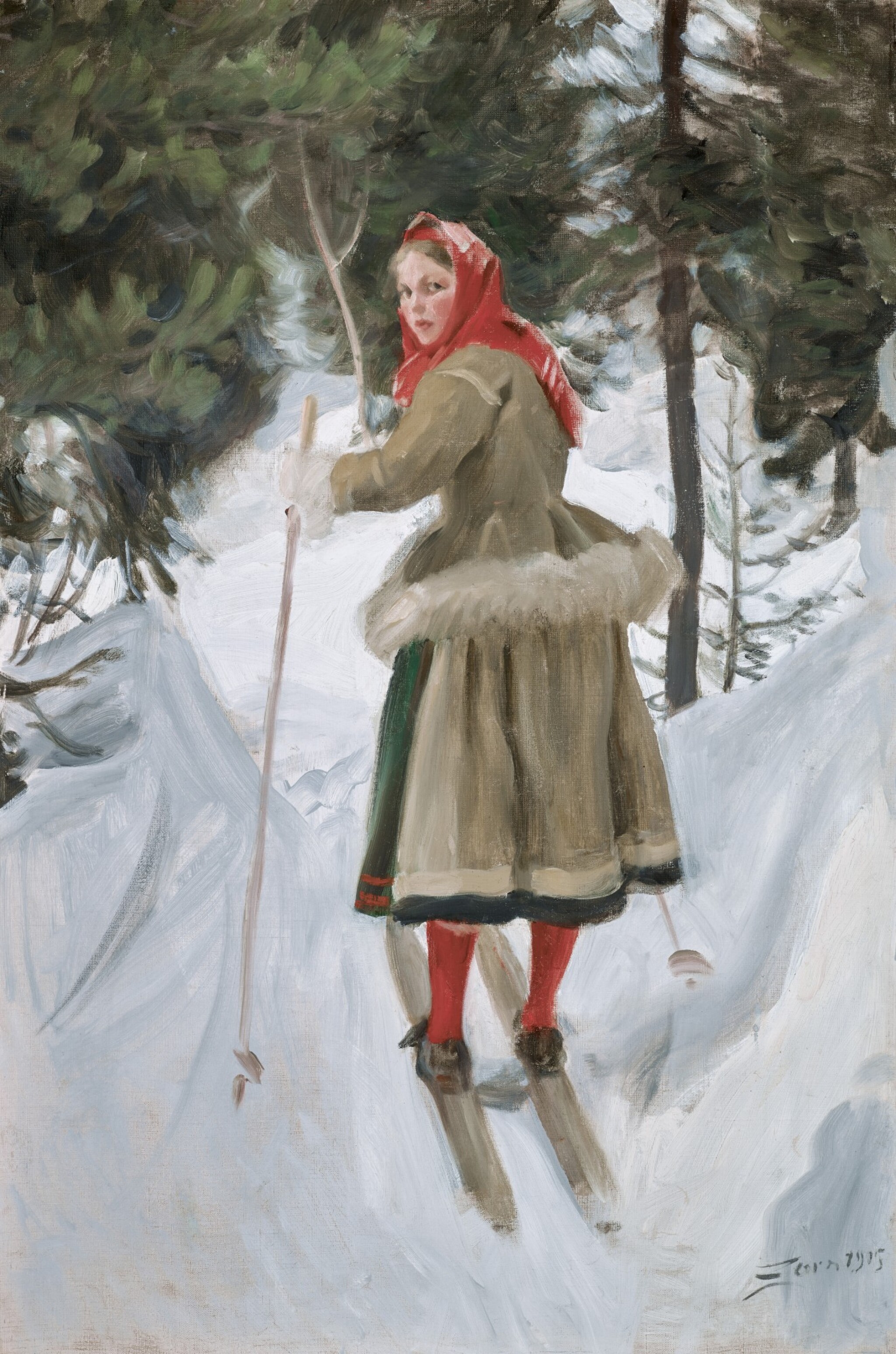 This painting is in good condition and ready to hang. The canvas has not been lined. There is a very light, faint stretcher mark towards the upper edge. Ultra-violet light reveals some minor signs of retouching: small spots of cosmetic retouching in the woman's grey brown coat, intermittent strokes at the framing edges, and a few other scattered small spots. There is an inscription authenticating the work by Gustaf Jaensson on the reverse of the canvas.

In 1905, Anders Zorn returned to his childhood home of Mora, in the region of Dalarna in central Sweden, an area characterised by its ancient, rural way of life. Born into humble origins, in the latter years of the nineteenth century Zorn established himself in high society across London, Paris and the USA, portraying three American presidents, as well as notable figures such as Andrew Carnegie and Isabella Stewart Gardner. After these cosmpolitan years, the folk rituals and customs of Mora offered him the perfect return to a traditional way of life and sense of rootedness. Local girls dressed in traditional costume became one of his favourite motifs.

'Zorn was fascinated by native peasant costume, and he respected local variations to the extent of refusing to paint a model in garb from outside her native district... With increasing industrialisation and the displacement of the population to the cities, there was concern for the preservation of the vanishing peasant culture' (Kirk Varnedoe, 'Nationalism, Internationalism, and the Progress of Scandinavian Art', Northern Light, New York, 1982, p. 234).

Zorn had already in 1896, as a pioneer in this field, begun to revive and encourage the old customs and handicraft traditions of his home province. When he gave the village of Morkarleby a May tree in 1896, he succeeded in reviving a tradition which probably dates back to pagan times. At midnight, the peasants would erect a tall pole decorated with flowers and greenery, and then dance until dawn. Zorn used his considerable fortune to philanthropic ends, establishing the people's college of Mora in 1907, as well as the open-air museum Zorn's Gammelgård, showcasing vernacular architecture reflecting the culture of the region. The nearby Zorn Museum holds the largest collection of the artist's work.

The First World War had a profound influence on Zorn, and caused him to isolate himself. 'He felt the war as a permanent weight and under these circumstances his Gopsmor studio became even more of a retreat. From a world of pain, where everything he dreamed of and hoped for was threatened, he fled to his work in this romantic milieu where he became absorbed in a primitive existence' (Gerda Boethius, Anders Zorn: An International Swedish Artist, his life and work, Stockholm, 1954, p. 72).

Soon after completing the present work, Zorn included it in his joint exhibition with Carl Larsson and Bruno Liljefors at the newly opened Liljevalchs Konsthall in Stockholm. Including 134 pictures plus etchings and sculptures, the exhibition has been described as the ‘first general survey of Zorn’s art’.