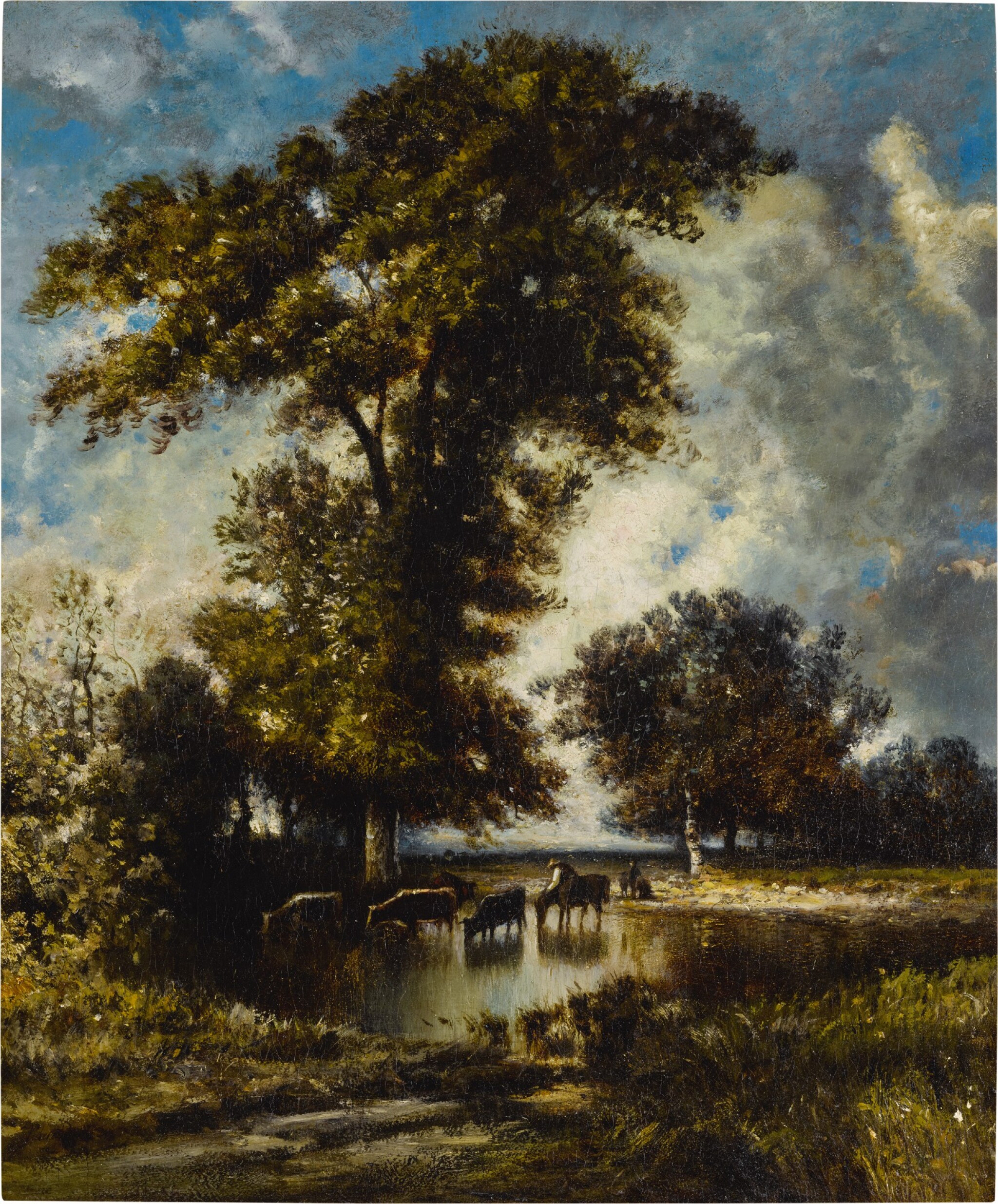 oil on paperboard laid down on canvas

This work appears to be painted on paperboard which has been lined onto canvas with wax as an adhesive. The lighter colors of the sky are in good condition. The darker colors of the tree and landscape have developed some weakness which has attracted retouches that are visible under ultraviolet light. The board on which it is painted had suffered a break in the upper center, and this break is still visible despite the lining. There are retouches in this area at the top of the tree. There is still weakness in the tree on the right, which could be retouched. Further restoration would be beneficial, but the work could also be hung in its current state.

Born in Nantes, Jules Dupré began his career in art as a decorative painter of porcelain (his father was the manager of a small factory) where he met and befriended Narcisse Diaz de la Peña. In 1829, Dupré was encouraged to leave for Paris, where his interest in landscape painting grew as he worked alongside artists such as Louis Cabat, Alexandra-Gabriel Decamps, and Paul Huet. While many of his contemporaries travelled through continental Europe, especially Italy, for study and inspiration, in 1834 Dupré made the rare choice to voyage to England — to sketch the countryside and its changeable weather, and to study the work of British landscapists, notably John Constable. Upon his return home, Dupré met success at the Salon and established himself as a key figure of the Barbizon movement.

In the following decades, Dupré would continue to build on his foundational experiences with English landscape painting, at Barbizon and with fellow artists devoted to realist depictions of nature, in particular his friend, travel companion and studio-mate Théodore Rousseau. Works from the 1850s, such as the remarkable Oak Trees and Pond (fig. 1, 1850-55, Musée d’Orsay, Paris), synthesize Dupré’s experiences while exemplifying his distinct, bold technique. This expansive composition, with its central tree towering toward the sky as cows water below, is similar to the slightly smaller present work, but with varying nuances in the quality of light and color tone of the grasses and leaves that suggest a subtle shift of season. The cloud-filled sky conveys the energy of Constable’s compositions, while the agrarian scene of cows with their herder were reflected in those hung at the Salon. With its strong trunk and broad branches, the great tree dominates the composition, dwarfing the figures below, its size alluding to the longevity of nature and the fleeting life of man — a symbol of Dupré’s Romanticism and allegiance to Rousseau (as well as his affinity for seventeenth century Dutch painters like Jacob van Ruisdael).

In 1890, one year following Dupré’s death, a group of his paintings were sent to New York for exhibition, affording an appreciative critic the opportunity to memorialize the artist’s genius in creating “glowing pictures… [with] colors laid on thickly… greens, yellows, blues ,and reds, used with no stinted hand… but with subtle skill in occasional use of grays and neutral tones… [Dupré] is a bold painter with great force and majesty in his masses and tones” (James M. Hoppin, “Some Criticisms on French Landscape-Painting, Suggested by the Recent Exhibition in New York,” New Englander and Yale Review, vol. XVI, 1890, p. 314). While not included in that exhibition, the present work is a powerful representation of the artist's powerful effect. In praising Dupré, the critic quoted French writer Théophile Gautier, who explained “We are no more accustomed to these superb extremes, to this excess of strength, to this overflowing of power, to these full-faced struggles with nature. This excessive scale dazzles the eye” (as quoted in Hoppin, p. 315).