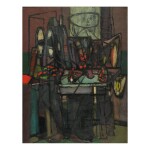 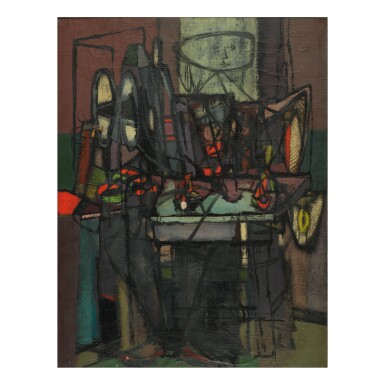 Overall this work is in good condition. Canvas is not relined. There is scattered craquelure throughout which has been professionally stabled on the bottom and a few spots of retouching are apparent by the bottom edge as well when viewed under ultra violet light.

Born in Lodz, Poland in 1895, Adler moved to Germany in 1913 where he established himself as a significant force in the German art world of the 1920s, participating in every important Expressionist show. His studies with Gustav Wiethuechter at the School of Art and Crafts in Barmen influenced his persistent interest in the technique of painting and the exploration of new textures. He was also greatly influenced by Picasso and Klee with whom he taught at the Düsseldorf Staatlich Kunstakademie and shared an adjoining studio. In 1933 he was forced to leave Germany, first settling in Glasgow in 1941, and then in London in 1943, where he exerted a major influence on postwar British painting. "Some critics have remarked upon the affinity between the grave seriousness of Jankel Adler's figures, his firmly constructed compositions, and the strength and severity of the Jewish orthodox religion in which he was raised. Some see in Adler's paintings a blending of the mathematical clarity of the Talmud with the mysticism of the Cabbala." (Avraham Kampf, Chagall to Kitaj Jewish Experience in 20th Century Art, Barbican Art Gallery, London, 1990, exhibition catalogue, p. 87.)