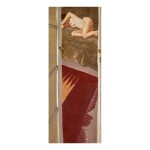 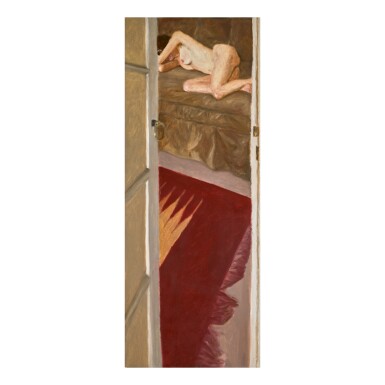 This work is in very good condition. The canvas is not relined. No retouching is apparent when viewed under ultra violet light.

André Fermigier considered Arikha's works of this period as redolent with tradition whilst still describing everyday modern life. “Some are bound to discover an artist in sympathy with Degas: his gods, Ingres and Poussin. Others will find a spirit more restless, more strained, given to the occasional sombre mood and a quirk of style that almost approaches expressionism. The two interpretations complement one another, and it is perhaps from their very confluence or discord that the rich texture of Arikha's work derives.” (Richard Chanin, André Fermigier, Robert Hughes, Jane Livingstone, Barbara Rose and Samuel Becket, Avigdor Arikha, Paris, 1985, p. 198).

This work belongs to a major series of nudes executed by Arikha in the 1980s. Duncan Thomson refers to the nudes from this period and notes that while some express the tensions of arrested movement while displaying sexuality others instill an everyday tranquility. Thomson continues and compares Arikha with the nudes of Lucien Freud and comments: “... but the two painters take a different approach to the problem of realism. Freud engages in an unremitting onslaught, where the layers of paint aim at the same plasticity as flesh itself; Arikha attempts, with an economy of means, to hold the evanescent luminosity of the model's flesh as something that is almost distinct from the substance that lies beneath the surface, although at the same time contributing to its realization. Few contemporary painters are equipped, either technically or psychologically, to paint from the model in either way.” (Duncan Thomson, Arikha, 1984, London, p. 182). In this arresting work of 1985 Arikha emphasizes the tension of the model who, although nude, is somewhat contemplative or melancholy. Her face is hidden, her limbs long and angular and the play of light and shade against her body is repeated in the texture of the plush sofa and again with the rich colors and sharp patterns of the ornamental Indian rug pointed towards her on the floor.