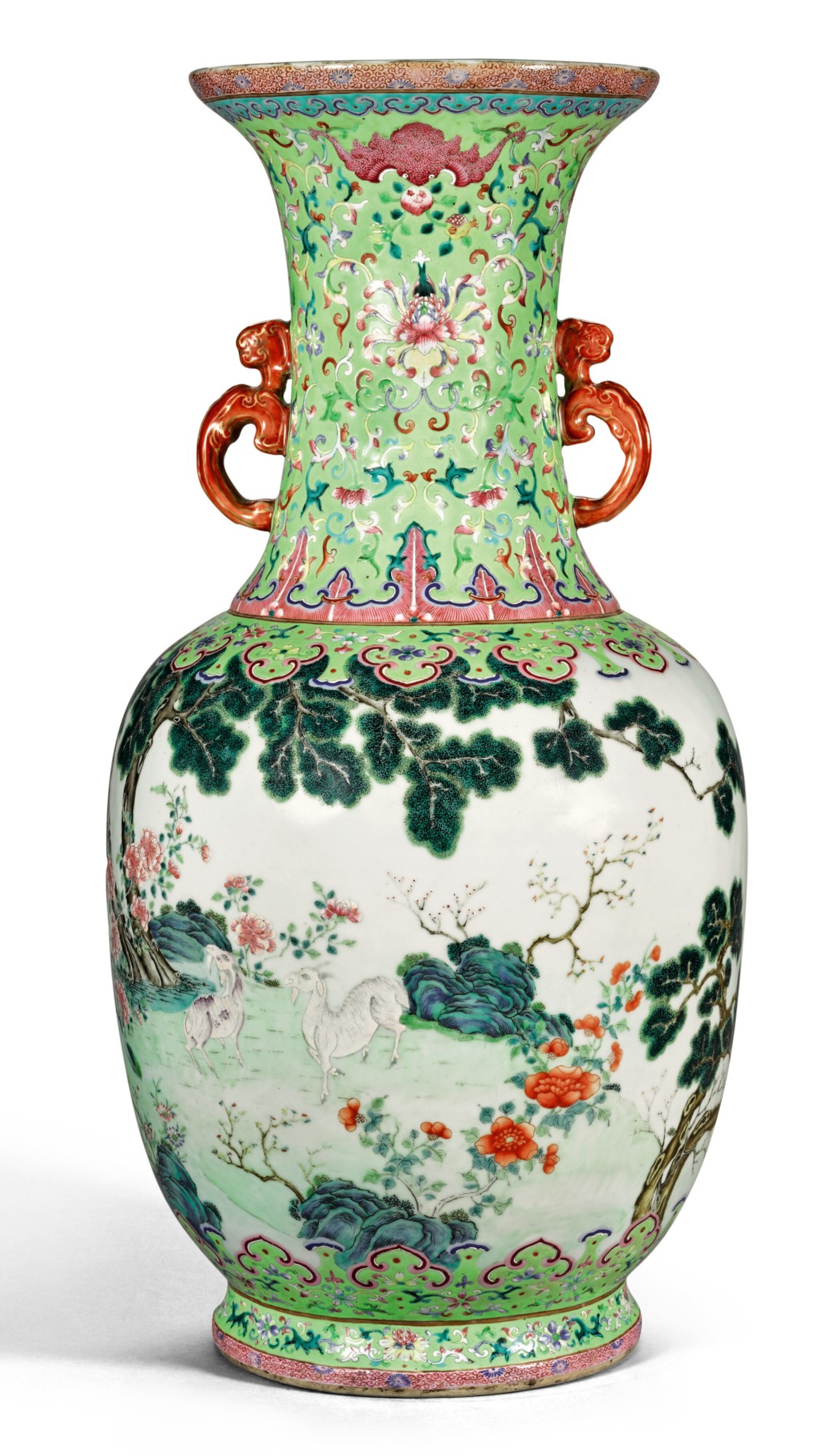 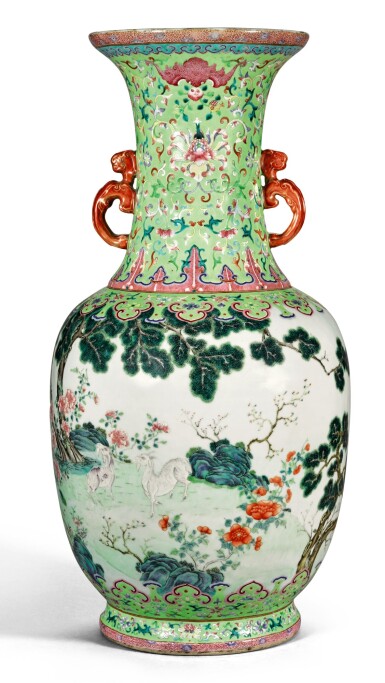 robustly potted with an ovoid body rising from a splayed foot, surmounted by a tall waisted neck and flared rim, the neck flanked by a pair of iron-red archaistic dragon handles accentuated with gilt highlights, the exterior of the body finely enamelled against the white ground with a continuous scene depicting three rams traverse in a landscape setting, detailed with fruiting and blossoming branches issuing from rockwork, including berries, roses and peonies and prunus, together with leafy trees, all between lime green-ground bands with ruyi blooms and floral sprays encircling the shoulder and lower body, the neck similarly decorated with further stylised lotus blossoms and bats suspending chimes between a band of ruyi pendant collaring the rim and pink floral band bordering the lower neck, the turquoise-enamelled base inscribed to the centre with a four-character hall mark reading Shendetang zhi ('Hall for the Cultivation of Virtue') in iron-red within a white cartouche

This large and impressive vase has a three-pointed hairline star crack (circa 14cm.) to the base, rubbing to the gilded decoration at the rim, light rubbing to the top edge of the iron-red band at the rim and minor glaze scratches and tiny enamel flakes.

This remarkably large vase belongs to a special group of imperial porcelains made during the Daoguang reign to furnish the emperor's newly built 'Hall of Prudent Virtue' (Shende Tang). Vessels of such imposing dimensions testify to the technological prowess of the potters active at the imperial kilns in Jingdezhen and showcase the opulence preferred at the imperial court.

Part of the Jiuzhouqingyan complex in the Yuanming Yuan, the Shende Tang was completed in 1831 and became the Emperor’s preferred residence until his death there in 1850. Featuring three connecting wave roofs on a square-shaped structure, the hall was markedly different from the more characteristic Confucian-inspired architecture, a feature that was reflected in the style of porcelain that was produced for it. Porcelains bearing Shende Tang marks such as this vase, are often decorated in brilliant coloured enamels against rich colour grounds, a style pioneered by the Qianlong emperor (r. 1736-1795) and inspired by paintings mounted on silk. Stacey Pierson notes that no less than 30 types of imperial Shende Tang porcelains are extant in public and private collections, mostly in the shape of bowls, dishes and vases, see Stacey Pierson, Rare Marks on Chinese Ceramics, London, 1998, p. 36.

This vase is painted with the 'Three Rams (san yang)' design that represents a change of fortune with the arrival of Spring and the New Year and is thus closely associated with New Year celebrations. The three rams are often shown together with the rising sun (taiyang) to form the rebus for 'three ram (yang) bring prosperity'. The Book of Changes (Yijing) first mentions the phrase san yang referring to the three male lines, called tai – the symbol of heaven. Tai is positioned under three female lines called kun that represent earth. Hence the phrase 'sanyang kaitai' which means the New Year brings renewal and a change in fortune.

Vases of such large dimensions and painted with this motif are rare, and no other closely related example appears to have been published. Compare a slightly smaller vase painted with this motif also inscribed with a Shende Tang mark, but with a more globular body, sold in our New York rooms, 4th December 1985, lot 283; and a much smaller vase with a Daoguang mark and of the period, sold in our Hong Kong rooms, 11th April 2008, lot 3025.