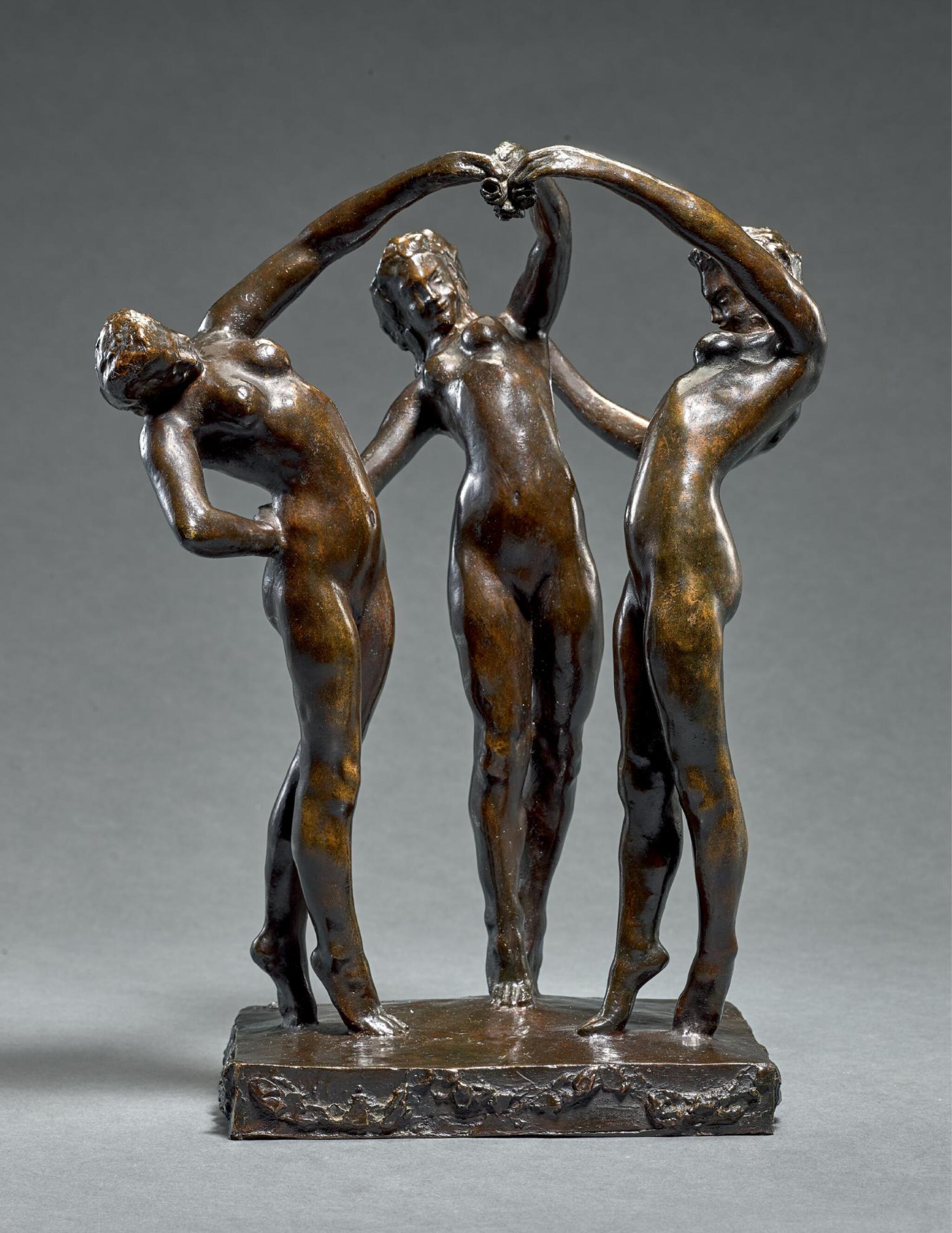 Overall the condition of the bronze is excellent with minor dirt and wear to the surface consistent with age. The bronze has a variated patina with areas of golden brown, such as at the figures’ legs. There are very minor fissures and some pitting to the bronze consistent with the casting process including a fissure at the centre figure’s proper left heel. There is some residue or surface texture in a few small areas such as at the right figure’s proper right hip.

Joseph Bernard began his studies in Lyons and received a scholarship in 1886 which enabled him to travel to Paris to attend the Ecole des Beaux-Arts. Whilst reference is often made to Auguste Rodin's influence, Bernard never worked in his studio, preferring to work nights at a printing press to finance the early lean years of his career. His fierce independence is reflected in his oeuvre, as he experimented with unconventional techniques such as carving in taille directe and modelling directly in plaster rather than clay. Towards the end of his career, Bernard's own influence on French sculpture had become immense. As one critic of the 1927 Salon d'Automne wrote: 'if all sculptures influenced by Bernard were removed from the galleries, what would there be left?'

La Danse des Roses was first modelled in plaster in 1905. During the course of that year, Bernard had experimented frequently with different interpretations of the theme of dance, modelling fluid and dynamic figures in clay and plaster. Compare the present bronze to his Danseur et Danseuse (Jullian, op. cit. cat. no. 75) and his Danseuse Nue (op. cit. no. 76), which is nearly identical to the dancer on the left side of the present group. The present group shows one dancer in several poses, with their hands laced together holding roses at the centre - it works almost as a series of stills from a motion picture, a montage of the same dancer in consecutive poses (Gomes Ferreira, op. cit., no. 6). Bernard sold the exclusive rights for the bronze of the present model to the Hébrard foundry, who cast at least five versions, one of which is in the private collection of Jean Bernard, the sculptor's son. The bronze was first presented at the Salon d'Automne in bronze in 1912. In a series of photographs of the sculptor's workshop, taken in the early years of the 20th century, the Danse des Roses in plaster is frequently visible in the background, showing its importance in the sculptor's oeuvre by its prominent position (see, for instance, Gomes Ferreira, op. cit., fig. 6).