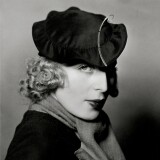 Born Tamara Rosalia Gurwik-Gorska in 1898 in Warsaw, Poland (then a sovereign state of Russia), Tamara de Lempicka has come to be recognized both by her epithet, “Baroness with a Brush,” and as icon of the Roaring Twenties. As the daughter of wealthy parents, she was sent to Lausanne, Switzerland, to attend boarding school as a child—an experience she despised. During the summer of one of her final years in Lausanne, however, her grandmother took her on a tour of Italy, where she first witnessed the work of Old Masters, an encounter that would ultimately inspire her life-long passion for art.

After the divorce of her parents, she was sent to live with an aunt in St. Petersburg; her aunt was considerably wealthy, and it was here that de Lempicka developed her taste for luxury living. At 18 she was wed to Tadeusz Lempicki, but within a year of their marriage the Russian Revolution forced the newlyweds to relocate to Paris—in a bid to reinvent herself in the new city, she assumed the name Tamara de Lempicka (a name she felt had an aristocratic air). Life as foreign refugees meant the couple was short on cash, and, missing the luxuries of her former life, de Lempicka became determined to earn money from her art. She approached this goal pragmatically, undertaking formal training at the Académie de la Grande Chaumière and studying under André Lhote. Lhote was closely associated with the Cubists, but described his own style as “soft cubism,” which did not adhere as strictly to angular flatness. His artistic instruction and encouragement of de Lempicka is arguably one of the single greatest influences on her later iconic visual techniques.

De Lempicka painted all manner of subjects, and her unique style, highly stylized with strong influences of both cubism and neoclassicism, immediately garnered her the attention of the social elite of Paris. She was soon showing internationally, and obtaining commissions for portraits from the rich and famous of Paris’ post-war golden age. Within this time, she and Lempicki divorced, and she was soon after commissioned by Baron Raoul Kuffner to paint a portrait of his mistress. During the portraits production, de Lempicka fell in love with the Baron, and, as a result of spite and jealousy, the portrait she created of the Barons lover was more than a little unflattering. The Baron and de Lempicka grew close, and were wed in 1934.
The outbreak of World War II saw the Baron and de Lempicka relocate to Hollywood, California. Initially, she was the toast of Tinseltown, and continued to undertake prestigious portrait commissions of the rich and famous; however, coinciding with the rise of Abstract Expressionism, her work began to fall out of favor. After the sudden death of the Baron on an ocean liner in 1961, she moved yet again but this time to Texas, before finally settling in Cuernavaca, Mexico, where she resided until her death in 1980.

Artist Image: Imagno/Austrian Archives
Please note that prior performance of the indexes and realized returns contained herein does not guarantee future results. In addition, there is no guarantee that random collections of individual works of art or stocks will yield index returns. We are not financial advisors and we are not in the business of recommending art as an investment. We also have no comparative advantage in forecasting the future direction of the art market. Investment decisions should be based on the risk return tolerance and time horizon of the investor with, if desired, the support of a licensed financial advisor. This information is provided "as is" and with no representations or warranties either express or implied of accuracy, merchantability, fitness for a particular purpose or of any other nature are made with respect to this information or to any expressed views presented in this information.