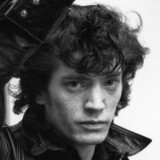 Born 1946. Died 1989.
Interested in selling a work by Robert Mapplethorpe?
Request an Estimate

Works by Robert Mapplethorpe at Sotheby's

Born in Floral Park, New York, in 1946, Mapplethorpe completed his B.F.A. at the Pratt Institute. His close friendship with his roommate, musician Patti Smith, benefitted his work and career; the two frequented the gathering spaces of the growing art scene in New York City late 1960s. His early work focused on collage and mixed-media assemblages of found objects and pornographic imagery. He worked as a staff photographer for Andy Warhol’s Interview magazine, and eventually turned to photography full time, after encouragement from friend and curator at the Metropolitan Museum, John McKendry. He photographed a wide array of subjects including still lifes, flora, children, and homoerotic images, through a staunch, at times blunt treatment, in large-scale black and white photographs. His works present honest, compelling, and deeply human imagery in all forms.

The incendiary and ignorant responses from conservative American organizations, such as the American Family Association, aided Mapplethorpe’s sales. One year before his death due to complications from AIDS in 1989, four major museums organized exhibitions of his work including the Institute of Contemporary Art in Philadelphia, the National Portrait Gallery in London, the Stedelijk Museum in Amsterdam, and a retrospective at the Whitney Museum. His works can now be found at the Museum of Modern Art, the Art Institute of Chicago, and many other major institutions.

Museums with Works by Robert Mapplethorpe