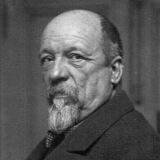 Born 1863. Died 1935.
Interested in selling a work by Paul Signac?
Request an Estimate

Works by Paul Signac at Sotheby's

Alongside Georges Seurat, the painter Paul Signac was one of the principle artists of Neo-Impressionism, the leading art movement of the late 19th century. Signac was born in Paris, France, in 1863, and initially studied architecture before devoting himself to painting at age eighteen. Impressionism was the mode of the time, and the works of leading Impressionists—such as Claude Monet, Édouard Manet, and Edgar Degas—clearly had an impact on the developing artist, as his early works employ the coloristic and compositional tenants of the movement.

In 1884, Signac assisted the founding of the Salon des Indépendants, an annual exhibition for artists dissatisfied with the official Salon. It was here that Signac met and befriended Georges Seurat; together they would break with the Impressionist group and develop the painting style referred to as Pointillism (a technique where paint is applied in small, individual dots or strokes that optically blend together when viewed at a distance), which would ultimately become part of the foundation of Neo-Impressionism. The method was far more exact and methodical than intuitive, but, nevertheless, Signac would exhibit his work at several more iterations of the Salon des Indépendants alongside the Impressionists.

Along with his devotion to developments in painting, Signac was also quite politically minded. Many scholars have interpreted oblique references to his own political ideologies within his work, namely after his public endorsement of anarchism in 1888. Signac, along with other painters such as Camille Pissarro, made regular donations to the Les Temps Nouveaux (The New Times) newspaper, a pro-anarchist and communist publication. Most boldly, though, he titled a work in 1893 In the Time of Anarchy, but, as authorities were beginning to persecute followers of the movement, he changed it to In the Time of Harmony.

Signac died in Paris in 1935, but his oeuvre still stands as a pillar of modern art—his work can be found in many museum and institution collections today, including the Metropolitan Museum of Art, New York; the Musée d’Orsay, Paris; and the Pushkin Museum, Moscow.

Museums with Works by Paul Signac