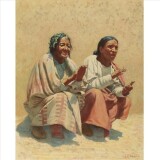 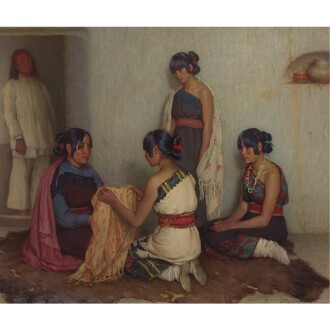 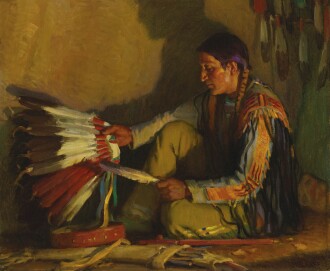 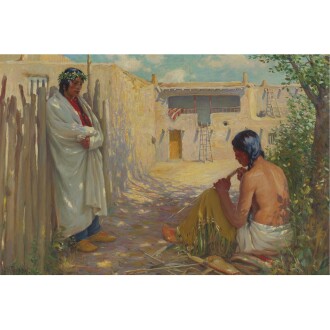 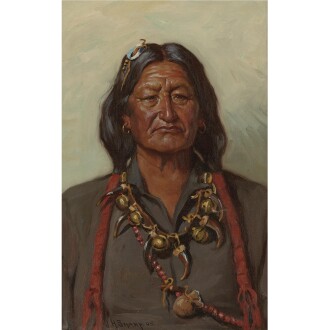 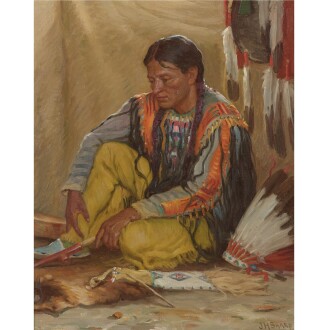 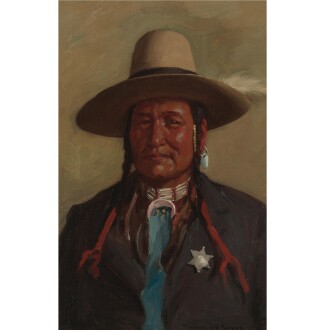 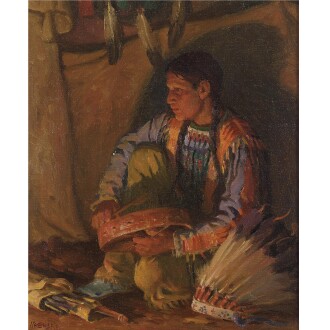 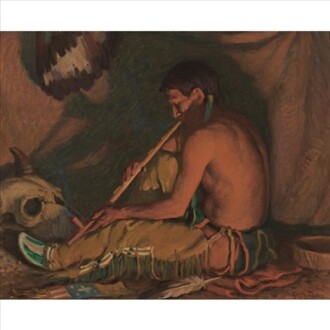 Known for his portrayal of Native American life and landscapes of the American Southwest, American painter and historian Joseph Henry Sharp was a leading figure of the Taos Society of Artists during the late 19th and early 20th centuries. During his long, prolific career, he rose to prominence as a well-respected artist and obtained significant commissions. He was committed to documenting the way of life of Native American tribes that he lamented was dying; his particular Realist style lent itself to an ethnographic study of his work in addition to its art historical influence.

Born in Bridgeport, Ohio in 1859, Sharp exhibited a fascination with Native American life from a young age. He nearly drowned while swimming as a young boy, which gravely impacted his hearing, and which led to him eventually becoming deaf. As a result, he did not receive a consistent formal education, exacerbated by his father’s death which forced him to begin working in a nail factory as a child. He briefly studied at the McMicken School of design, the Cincinnati Art Academy, the Royal Academies of Fine Arts in Antwerp and Munich and Académie Julian in Paris during brief stays in Europe in the early 1880s. He documented his travels across the American West in New Mexico, Arizona, California and Wyoming, where he began sketching the Ute, Pueblo, and Umatilla tribes. He approached these works with a particular accuracy in order to preserve images of a neglected subject. President Theodore Roosevelt commissioned Sharp for 200 portraits of Native American warriors who had survived the Battle of the Little Big Horn. He evolved his style over time, and permanently moved to Taos where he began painting en plein air to capture the particular light of the Southwest. By the end of his ninety-three years, Sharp produced over 10,000 paintings and sketches, of which seventy five percent are of Native American subjects.

In addition to President Roosevelt, Sharp secured patronage with major figures of the time, including industrialist Joseph Butler, the Smithsonian Institute and Phoebe Apperson Hearst. Philanthropist Thomas Gilcrease purchased many of Sharp’s paintings and personal collection of Native American memorabilia when the artist was eighty-six; the Gilcrease Institute houses the majority of Sharp’s oeuvre today.

Type: featured
Category: Handbags and Accessories
Breaking The Rules: How A New Generation Of Male Style Icons Is Embracing Jewelery
Type: video
Category: Expert Voices
The Treasures of Empress Josephine Bonaparte
Type: video
Category: First Look
Zao Wou-Ki's Abstract Symbolism
Type: featured
Category: 19th Century European Paintings
Marie, Maria and the Dramatic Story Behind Burne-Jones's Venus Epithalamia
Type: video
Category: First Look
Sotheby’s Inaugural Chinese Art Week – Beauty and Harmony of the Five Elements
Type: story
Category: Sneakers & Collectibles
Seven Best Sneakers For Holiday Gifting
Type: featured
Category: Books & Manuscripts
Free Verse And Words In Freedom
Type: video
Category: Expert Voices
Distillers One of One | Groundbreaking Charity Whisky Auction
Type: featured
Category: Books & Manuscripts
Scary Monsters And Super Creeps: Guillermo del Toro on the enduring inspiration of Arthur Rackham
Type: story
Category: Press Release
Sotheby’s Hong Kong Launches Its First Tea Auction - Tea Treasures – Rare Vintage And Premium Puerh The Inaugural Tea Sale
Type: featured
Category: Contemporary Art
Passion…Passions
Type: featured
Category: Karl Lagerfeld’s Estate (December 2021)
Schiffer On Lagerfeld: "I Will Be Eternally Grateful To Him"
Please note that prior performance of the indexes and realized returns contained herein does not guarantee future results. In addition, there is no guarantee that random collections of individual works of art or stocks will yield index returns. We are not financial advisors and we are not in the business of recommending art as an investment. We also have no comparative advantage in forecasting the future direction of the art market. Investment decisions should be based on the risk return tolerance and time horizon of the investor with, if desired, the support of a licensed financial advisor. This information is provided "as is" and with no representations or warranties either express or implied of accuracy, merchantability, fitness for a particular purpose or of any other nature are made with respect to this information or to any expressed views presented in this information.