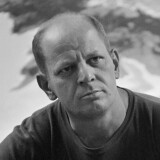 Born 1912. Died 1956.
Interested in selling a work by Jackson Pollock ?
Request an Estimate

Works by Jackson Pollock at Sotheby's

A progenitor of Action painting and a leading figure of Abstract Expressionism, Jackson Pollock has become an icon of 20th century American art. Pollock’s “drip” paintings are immediately recognizable, and his hardscrabble life has fed into an enduring mythology of the modern artist as rebel. Born 28 January 1912, in Cody, Wyoming, Pollock began his study of painting in 1928 at Manual Arts High School in Los Angeles. Towards the end of 1930 he moved to New York City, and continued to study painting under Thomas Hart Benton at the Art Students League. By 1934 he settled permanently in New York, and the following year, began working on the Works Progress Administration Federal Art Project.

In 1943, Pollock found employment on the maintenance staff of the Museum of Non-Objective Painting (the precursor of what is now the Guggenheim Museum), before dealer Peggy Guggenheim provided him with a contract, thus allowing him to devote his time exclusively to painting. Pollock had his first solo show at Guggenheim’s New York gallery Art of This Century, featuring work that combined vigorous, seemingly haphazard, brushstrokes and abstracted figures, as well as geometric forms and symbols (illustrating the influence of Pablo Picasso, whom Pollock deeply admired). In the first acquisition of many, the Museum of Modern Art in New York would purchase one of the paintings from this historic exhibition. Pollock’s second solo show at Art of This Century led Clement Greenberg, the preeminent art critic of the day, to declare Pollock “the strongest painter of his generation.”

In 1945 Pollock married fellow artist Lee Krasner, and, shortly thereafter, amid both financial and personal stress (including an ongoing battle with alcoholism), moved out of the city and to the Springs, on the east end of Long Island. By 1947, Pollock’s process of dripping and pouring paint materialized in his work; rather than use the traditional easel and stretched canvas, he instead laid unstretched canvas on the floor, allowing him to experiment with different forms of paint application, specifically pouring, dribbling, and splashing paint from a stick, paintbrush or directly from the container. Further, he began using thinned enamel and metallic paints, as their consistency better suited his technique. Pollock embraced the “all over style,” which avoided creating emphasis at any one point of the painting. Although by1952 Pollock had returned to a semi-figurative approach, the five years he spent creating “drip” paintings have become some of the most famous and important works in the history of American painting. Pollock died prematurely in a car accident in the summer of 1956.

Museums with Works by Jackson Pollock