2. Although Pollock was raised agnostic, while studying at Manual Arts High School in Los Angeles he became interested in spirituality and theosophical literature. He regularly attended meetings of the theosophist Jiddu Krishnamurti, an Indian spiritual leader. 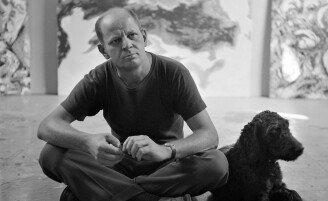 3. He initially studied under Synchromist and American Social Realist painter Thomas Hart Benton at the Art Students League in New York, who’s work strongly influenced Pollock’s early painting, and, on a personal level, the older artist was a source of early encouragement. Pollock even served as model for Benton’s momentous mural America Today (1930–31), which is now in the collection of The Metropolitan Museum of Art, New York.

4. While living in near poverty, Pollock worked briefly as a custodian at the Museum of Non-Objective Painting in New York City, which was the portent of the Solomon R Guggenheim Museum.

5. Like many of Pollock’s contemporaries, he worked for the WPA Federal Art Project beginning in 1935 until 1942, which gave him a degree of financial security for the first time in his adult life.

6. Following his tenure as part of the WPA, he joind David Siqueiros’s Experimental Workshop, where he and fellow artists in the group developed and experimented with newfangled painting techniques—some of which critics have considered precursors to Pollock’s later drip technique.

8. Despite having numerous exhibitions abroad, Pollock never traveled outside of the United States.

9. Alcoholism was an issue for Pollock beginning in adolescence, and he needed treatment as early as 1937, and by 1938 he suffered a nervous breakdown resulting in institutionalization and the beginnings of Jungian psychoanalysis.

10. While the artist was considered introspective and temperate when he was sober, he was equally known for being an aggressive and violent drunk. It is alleged that some would watch him drink, or buy him alcohol, just to see what antics he’d get up to.

11. Some of the Jungian psychoanalysts Pollock worked with used his own drawings in their sessions.

12. Pollock met the seminal painter Hans Hofmann through his wife, painter Lee Krasner, and the two became good friends. Hofmann critiqued Pollock’s work, saying he needed to look more to nature, to which Pollock replied, “I don’t paint nature, I am nature.”

13. Acclaimed gallerists and collector Peggy Guggenheim gave him his first solo show at her Art of This Century Gallery in 1943.

14. Guggenheim commissioned Pollock to complete a monumental canvas for her Manhattan home, resulting in Mural (1943). He used the money from this commission for purchase a farmhouse in Springs, Long Island.

15. Shortly after moving to Long Island, he and fellow painter Lee Krasner were married. She was considered to be a very calming and stabilizing force in his life.

16. Although today Pollock is recognized as possibly the most important painter of his generation, criticism of his work during his lifetime ran the gamut between positive and negative. While Greenberg consistently championed his work, Time magazine derogatively referenced him as “Jack the Dripper.” 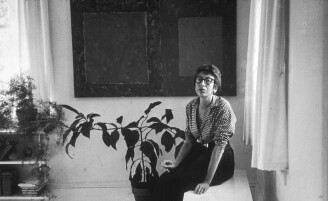 17. No one knows the exact way that Pollock came to his drip technique. In the 2000 movie biopic, it is shown as an accident, but his oeuvre suggests it was an experimental trajectory, or, “controlled accident.”

18. As he largely painted in an outbuilding of his home in East Hampton, bugs would often come into contact with his wet canvases and get stuck, such as in One: Number 31, 1950 in the collection of the Museum of Modern Art, New York, where the fly is still present and encased in paint.

19. After roughly two years of sobriety, he returned both to drinking and a degree of figuration in his work around 1950.

20. In the summer of 1956, Krasner took a trip to Europe, and while she was away Pollock began an affair with Ruth Kligman. While driving with her and one of her friends, he lost control of the car and he and the friend were killed, and Kligman seriously injured.

21. Both Pollock and Krasner benefited from the WPA Federal Art Project, and, seeing little similar opportunities for later young artists, Krasner founded the Pollock-Krasner Foundation in 1985 “for the sole purpose of providing financial assistance to individual working visual artists of established ability.”