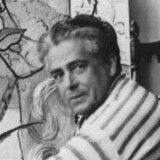 Born 1879. Died 1953.
Interested in selling a work by Francis Picabia?
Request an Estimate

Works by Francis Picabia at Sotheby's

Born in 1879 in Paris to parents from prominent European families, Francis Picabia received a private income that allowed him a degree of freedom that was unusual for artists of his time. Picabia studied at the prestigious École des Arts Decoratifs, and while there he met and befriended fellow artists Georges Braque and Marie Lautencin.

Picabia would experiment with a multitude of styles. At the start of his career, he painted in an Impressionist style, but was soon influenced by the numerous, radical artistic movements happening both within Paris and abroad. He particularly empathized with the shift towards non-objective art, and said at one point that “paintings should not represent nature, but the emotional experience of the artist.” By 1909 he was painting as a Fauvist and Cubist, and in 1913 he travelled to New York City to exhibit at the Armory Show, where he exhibited several Cubist works that were well reviewed. He would return to the US in 1915–16, at which time he immersed himself in burgeoning Dada movement. Working alongside Marcel Duchamp and Man Ray, he aided the early development of Dada, which he would later help solidify as a full movement in Paris around 1919. Always the experimenter, he became bored with Dada by 1921, denouncing it for no longer being “new,” and he became involved with André Breton and engaged with the Surrealist art circles in Paris (although his relationship with them would be short-lived as well, again faulting it for losing its newness).

Picabia’s late career works are generally abstract, and his popularity fell into decline in the years before his death in 1953. A retrospective held in 1975 at the Grand Palais in Paris in 1975, however, reinvigorated interest in his work, and today he is considered a seminal figure of post-modernism. Modern art museums have readily acquired his work, such as the Museum of Modern Art, New York (which held a full-career survey of his work in 2016); the Centre Georges Pompidou, Paris; and the Art Institute of Chicago, among many others.

Museums with Works by Francis Picabia

Artist Image: 2013 Imagno
Please note that prior performance of the indexes and realized returns contained herein does not guarantee future results. In addition, there is no guarantee that random collections of individual works of art or stocks will yield index returns. We are not financial advisors and we are not in the business of recommending art as an investment. We also have no comparative advantage in forecasting the future direction of the art market. Investment decisions should be based on the risk return tolerance and time horizon of the investor with, if desired, the support of a licensed financial advisor. This information is provided "as is" and with no representations or warranties either express or implied of accuracy, merchantability, fitness for a particular purpose or of any other nature are made with respect to this information or to any expressed views presented in this information.