G old was immensely important to Yves Klein. As a colour, the shimmering and resplendent hue formed one third of the chromatic trio upon which the vast majority of his oeuvre was based. As a material, the metal provided him with a medium already imbued with so many of the qualities he sought in his work. Subsequently, the Monogolds, are considered to be of great significance to the interpretation of the entirety of this artist’s cruelly curtailed career. It is as delicate in aesthetic as it is ferocious in conceptual vigour, and filled with the artistic impetus that defined Klein’s production.

In the context of Klein’s oeuvre, the Monogolds should be viewed as the direct descendants of the artists most radical and conceptual works: the immaterial zones of pictorial sensibility. In order to create these works, Klein did nothing more than select an empty room and declare it filled with his pictorial sensibility and, as such, worthy of consideration as a complete art work. He exhibited one example at the Galerie Iris Clert in Paris in 1958 and another example is still held in the permanent collection of the Kunstmuseum Krefeld following Klein’s 1961 retrospective.

Klein also sold a number of these works to the foremost collectors of the Parisian avant-garde, through commercial exchanges shrouded in ceremony and intrigue. An immaterial work could be bought for a kilogram of gold, with proof of ownership provided in the form of a meticulously written receipt. However, in a seditious manner typical of the artist, the conditions of sale required the buyer to immediately burn the receipt, while Klein would simultaneously dispose of the gold into a fast flowing river. The Monogolds are the direct progeny of these ceremonies. Indeed, such is the delicacy and grace of the present work, we can even imagine the gold fluttering onto its surface. Klein’s Monogolds are the physical manifestations of his immaterial zones.

Gold is one of three colours upon which Klein returned to throughout his career. He loved the manner in which material and colour were one and the same, and automatically imbued with a sense of inherent importance and value. Gold reminded Klein of a chivalric age that had obsessed him since childhood: as a teenager, he had learnt to ride with a view to travelling round the world on horseback; and as an adult, he joined the Order of the Knights of St Sebastian – a catholic group who regularly gathered in full heraldic regalia. 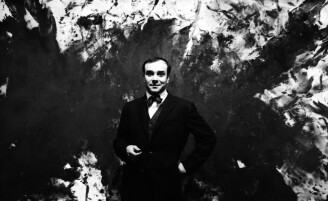 Gold was also redolent of the time Klein had spent training in Judo in Japan, reaching the goal of third dan black belt: it reminded him of the gilded Buddhist and Taoist temples he had visited whilst living there, and the discipline that their religion – and his regime – had engendered. He also loved Gold for its vibrancy. As well as a conceptualist of profound complexity, Klein was an artist of great technical skill who had conducted extensive investigations into how to suspend pigment so that it retained its freshness and vitality. He even patented his signature hue: International Klein Blue.

When working with the metallic sheen of gold – eternally shimmering and catching the light – this problem disappeared. Thus Gold was not just a material of conceptual significance to Klein, but also a colour of sentimental and emotional import. The present work typifies his bold enigmatic style and, for its delicacy and subtlety, should be viewed in keeping with the most lauded works of the series.