Works by Renoir, Signac, Vuillard and More Demonstrate the Richness of Painting Around the Turn of the Century

A selection from the Moschalaidis family collection allows us to observe the diverse painting styles which were popular within a small span of time demonstrating the richness of the late 19th and early 20th century artistic movements.

Boudin was one of the very first artists to go out and paint in plein air. His most re—occurring and beloved subject is the sea and ocean which he painted in various conditions. He carefully annotating the back of his canvases with the weather reports in which the work was painted in. Perhaps his love of the sea was imbued in him in his days working on a steamboat at the tender age of 10. As can be observed in Anvers, he combined the naturalism of the 19th century with the brushstrokes and light present in impressionism. Beyond his own works, Boudin’s effect can be seen in the works of Monet as in 1858 upon meeting Monet, who at the time was only 18, Boudin successfully convinced him to become a landscape painter.

Gabrielle, depicted here, was one of Renoir’s frequent models. She joined the family as Renoir’s second son, Jean Renoir’s nanny. Jean and Gabrielle developed a strong bond and maintained contact throughout their lives. When Renoir and his family moved to Cagnes-sur-Mer, Gabrielle accompanied them. In Renoir’s later years, he developed severe rheumatoid arthritis but continued to paint with the help of Gabrielle who would place the paintbrush between his crooked fingers. Renoir’s portrait of Gabrielle is executed in his characteristic style of Impressionism which consisted of quick brushstrokes and a soft look.

Édouard Vuillard was the son of a retired army captain and was expected to follow in his father’s footsteps. At the age of 10 his family moved to Paris. On the advice of a friend he decided to go Lycée Condorcet where he had been awarded a scholarship. He later became one of the founding members of the Nabis movement. The painting demonstrates different techniques as can be seen in the abstract wall behind the flowers which serve to make the flowers stand out more. Vuillard is considered an “intimist” as he chose to paint everyday scenes. Vuillard associates interior spaces with the interior self which make his still lifes, escapes from the world.

Paul Signac was influenced by Impressionist artists and modern theories on color which led him to develop pointillism (aka Neo-Impressionism) along with Georges Seurat. Signac felt that the role of color in Impressionism was too limited and decided to expand into a more intense color realm within pointillism. La Passe de Marseille is a beautiful example of Signac’s Neo-impressionism style as his brushstrokes are short, square like forms which when placed in a pattern form the image. The color palette in the painting is distinctive of Neo-Impressionist art and Signac’s color theory which employed contrasting colors next to each other in order to create a more brilliant effect.

Gustave Loiseau is most well known for his landscapes and Paris street scenes as is illustrated in this painting. Gustave Loiseau originally experimented with pointillism but settled on what is now seen as his signature technique which is an adaptation of Post-Impressionism. His technique, en treillis, observable in this painting, consisted of cross-hatching which was used to create tonal and shading effects by painting parallel lines close to each other which impart in Environs de Paris a soft quality and idyllic effect. 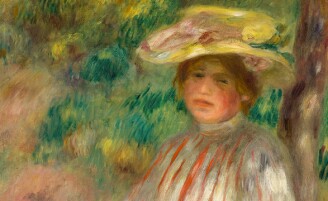