What Makes a Musical Manuscript Valuable?

Autograph manuscripts written by the world’s greatest composers are highly sought-after because of who wrote them.  It is remarkable that original manuscripts written by JS Bach, Mozart and Beethoven, the three greatest figures in Western Music, are still available at auction. In the rarefied world of manuscripts, Music has a special place because such autographs can still be found, in a way that is seldom matched in literature.

The availability of autograph literary manuscripts, say by Jane Austen, George Eliot or Goethe, is much more restricted than with music; only the French market compares with music. However, music has the added advantage of being an “international language”. If the manuscript of a substantial work by a great composer comes to the market then the price tends to break records.

For this reason the highest price for any post-medieval manuscript at Sotheby’s, meaning one enshrining a masterpiece (rather than being itself a masterpiece of calligraphy, painting or illumination), is held by a complete musical work: Mahler's Second Symphony, which realised a price of £4.5m ($5.6m) on 29 November 2016. This is arguably the most popular symphony by one of the world’s most popular symphonists. The previous auction record for a post-medieval manuscript was held by a Mozart volume, containing no fewer than nine symphonies in his hand, which made £2.5m ($4.7m) way back in 1987. This manuscript is still owned by the private purchaser who bought it 1987. What would this make now?

If the composer is great enough and the work important enough — and they don’t get much greater than Beethoven’s Ninth Symphony — then the manuscript does not even have to be entirely autograph. In the case of the manuscript sold at Sotheby’s in 2003 for £2.1m ($3.5m), the symphony is by Beethoven, but the manuscript was written out by a copyist and corrected by the composer.

However it was the manuscript that Beethoven revised and sent to the publisher, so it has great status as enshrining the final word of a great composer on one of his most famous and substantial works. This manuscript now resides in a major research library. These same factors made a single leaf of Beethoven’s Ninth pass the million pound-mark in 2002.  This is believed to have been Beethoven’s first surviving sketch for his towering masterpiece and made £1.3m ($1.9m), still the record anywhere for a single leaf of music.

Rarity is also obviously important, provided the composer is sought-after anyway.  Shorter manuscripts by Beethoven, Mozart and Mahler are not so uncommon, but what made Mahler's Second Symphony a record breaker is that it was monumental and it was complete, and there had not been a complete autograph manuscript of a Mahler symphony at auction since 1957 (indeed there hadn’t been one of Brahms's, Tchaikovsky’s or Bruckner’s either).  Some composers are absolutely rare, for whom no autograph music survives at all: Monteverdi, Corelli and Domenico Scarlatti amongst the most famous.


Others are rare on the market for various reasons: Handel (because practically all his autographs are in the British Library), Tchaikovsky (because they are practically all in Russia), and Mussorgsky (because he died poor, unrecognised and drunk before anyone had the foresight to keep his manuscripts, and those that survive are in Russia). However, to make a great price it has also to be great piece, be the composer ever so rare. Sotheby's sold a manuscript by one of the composers mentioned above for a six-figure sum a few years ago.

It was the first substantial manuscript of this famous composer ever to be sold at auction for the reasons adumbrated, and sold for within the estimates. One of the greatest music collectors was fascinated by this item from a composer of whom he held nothing and asked for lots more information. In the end he did not bid, having come to the conclusion that, whilst it was "a very interesting and rare manuscript", the music itself was "terrible". Even Homer nods…

CLICK HERE to read about the discovery of a previously unrecorded Gustav Mahler manuscript, to be offered for sale in the Musical Manuscripts sale on 22 May in London.

Wondering how much your musical manuscript might yield at a Sotheby’s auction? CLICK HERE to request an estimate. 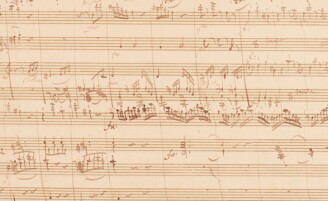 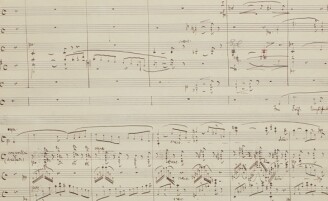