T hough he was born and educated in Pittsburgh, Andy Warhol spent the entirety of his adult life in New York. Already notorious by the mid-1960s for his celebrity portraits, Warhol extended his repertoire of subjects to include the eminent figures of his adopted home city. From prominent art collectors, dealers, notorious individuals, and public officials to his panoply of movie stars and first ladies, Andy Warhol's portraits idolized the who's who of New York. No subject exemplified this ideal more than the then governor, Nelson A. Rockefeller, who provided Warhol with a wholly irresistible mix of glamour, power, celebrity, and controversy in a single subject. Rich beyond belief, Nelson Rockefeller was a scion of America's most prominent industrial family, and at the time of his portrait, the most prominent Republican spokesman for civil rights and racial equality, and the principal architect behind the landmark Civil Rights Act of 1964. Arguing for equal voting opportunities and an end to segregation and employment discrimination in a series of passionate public speeches, Rockefeller vehemently opposed the hard-line conservative policies of his Democratic rivals which had culminated in violent riots of 1963.

With a celebrity that rivaled the Hollywood stars that Warhol idolized, Nelson Rockefeller variously inhabited the roles of vivacious art collector, philanthropist, and prominent public figure. One of Warhol's earliest celebrity portraits, the present work is significant for it is in the latter capacity that Warhol chose to portray him: as Rockefeller, the politician – under siege and alone, battling against a sea of press microphones. Appropriating his imagery from a press photograph, Warhol captured the intensity and focus of Governor Rockefeller mid­ speech, the graininess of the screen and the outsize impression of power it carries communicating the intensity of the subject's beliefs and convictions.

Amongst Warhol's most monumental portraits of the late 1960s, the present work was commissioned by Rockefeller along with three other panels and installed in a quadripartite, frieze-like arrangement. The other panels have since dispersed and now reside in important collections including the Andy Warhol Museum in Pittsburgh. Uniquely distinguished by their bold format and colorful, vivid compositions, the present work is exemplary for its marriage of subject matter and composition, its bold tones alighting Rockefeller's gaze a paragon of Warhol at his best. 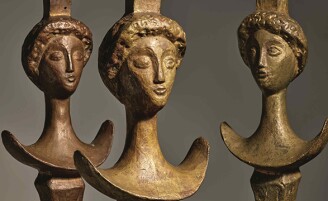 Past Auction
A Modernist Vision: Property from the Collection of Nelson & Happy Rockefeller
13 November 2018 | 9:00 AM EST | New York

Warhol's early successes as a fashion illustrator had revealed an intuitive awareness for crafting compositions that could play on the tenets of mass imagery, and thus generate widespread appeal. In the present work, the artist builds upon this commercial foundation to communicate a message written into the interplay of line, color, and appropriated imagery on the canvas. Reflecting his sensitivity to the individual character of the subject, the composite strains of Nelson Rockefeller's persona are dynamically constructed through bold planes of overlapping vibrant color and brought to life by the distinctive off registration of the screen print. Locked between valences of tone, looking out into the distance, Warhol captures his subject's true essence, powerful yet confined, an icon of American politics, wealth and celebrity now long gone.