By Sotheby's
中文閱讀
At the turn of the 20th century, the first examples of pure abstraction made their debut in the Western art world. Since then, abstract art has become a major cornerstone of the principal artistic traditions of the modern and contemporary era.

T he tradition of abstract art encompasses a myriad variety of schools and styles. In what is perhaps its most celebrated line of development, Abstract Expressionism, there is primordial emphasis on physical gesture, spontaneity and improvisation. In another, the abstract Surrealist school, symbolic forms derived from the unconscious come into the spotlight, revealing facets of the subconscious psyche.

In contrast to the above two approaches, which foreground uninhibited expression of feeling and subjectivity, the mode of geometric abstraction placed emphasis on clear construction, pure form and immaculate execution. Works by Piet Mondrian, Wassily Kandinsky and Kazimir Malevich exemplify this form of abstract creation.

In the East, and especially within China, abstraction developed in much less systematic lines of flight – and gave birth to idiosyncratic visions that fused Western abstraction with Eastern artistic, philosophical and spiritual traditions.

Historical and political context is important; as eminent critic Gao Minglu observes: “The history of contemporary abstract art in China cannot be understood in purely formal terms. It is also important to understand the marginalised place that abstract art has had in China, at least until recently. It was marginalised because it was seen as, in certain ways, connected to tradition, when to be avant-garde was equally marginalised because the international market gave priority to Chinese political and social subject matter. This orthodoxy found no place for or overlooked abstract art, so-called non-political art, which in fact is also political…”

According to art historian Edward Lucie-Smith, “Yu Youhan [was] one of the first painters [of the post-socialist era] in China to turn Western style into his own artistic language”. A true pioneer of the Chinese avant-garde, Yu was one of the foremost trailblazers of abstraction in the country, and is regarded by some to occupy the same importance for China as Piet Mondrian and Jackson Pollock have for the West.

When examining Untitled, which hails from Yu Youhan’s pioneering Circle series which began in the mid-1980s, one witnesses the sublime fusion of form and spirit, intuition and control, physical gesture and the natural force of the universe.

Minimal, monochromatic yet richly, dynamically enigmatic, Untitled confronts the viewer with its brooding palette and rhythmic arrangement of short staccato brushstrokes, exuding gently surging momentums that overlay each other in a looming and visually enthralling composition.

Formally, Yu combined the intuitive gestural marks of traditional Chinese ink painting with the all-over visual effects of Western abstraction, manoeuvering a formidable balance between expression and controlled composition. On a deeper level, Yu infused Western abstraction with the transcendent qi of Eastern spirituality, allowing the natural law and flow of the universe to guide his art.

In the artist’s own words: “On a spiritual level, my greatest inspiration came from Laozi’s Daodejing, which I hadn’t read until the 1980s. When I did read it, I fell enraptured by the basic ideas within. I hope that my own work can be like Laozi’s, the idea that the universe is alive, in a permanent state of change”.

Combining facets of Western expressionism, symbolic form and geometric abstraction, and rooted in the deep lineage of Eastern spirituality, Yu Youhan’s Circle series manifests what is perhaps the first ‘post-West’ abstract aesthetic – one that articulates a voice of the universal and the infinite. 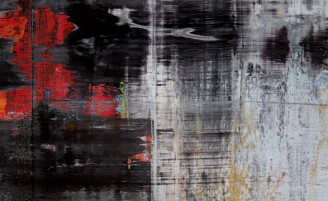