Vocation:Avocation – An Interview with Michael Maharam

Design expert Simon Andrews sits down with Michael Maharam, who for over two decades has carefully assembled an impressive collection of international design. As former owner of the contemporary textile company Maharam, Michael advocated for a rigorous and universal commitment to design that cross-pollinated between his professional endeavors and his private collecting. The collection is as diverse as it is carefully-chosen, providing a compositional environment that is considered, yet effortlessly uncontrived. Themes of texture, tone, shape and substance interweave sensibility across all medium and eras, celebrating the material integrity that is at the core of his vision.


Simon Andrews: Michael, I have known you for over twenty years, and as a collector I always felt that you had the most intuitive eye for identifying the very best example of its type. How important is intuition, as a collector?

Michael Maharam: Much as is the case with fine art, this is very personal…in terms of both the piece, and in the case of serial production, the version, material, and the patina. In iterative serial production there is always the issue of rarity, and of course high-caliber condition and originality are scarce and should be the objective. Ultimately, one should prioritize subjectively…a dog-eared example can be charming, and a piece too fine perhaps too fussy.

“In the end, I find that collecting is more about the journey than about the objects…which are simply the manifestation of the experience. For this I am most grateful.”

SA: Collecting is a calling. When did you first discover that you might be a collector, did you choose the objects, or did they choose you — and what were those objects?

MM: In the old days, i.e. pre-eBay, flea markets were the playground of the inveterate collector. The flea was a place to get lost in the penchant for one’s visual sorting and editing which was required when funds were scarce and merchandise abundant. I didn’t have much to spend in my late teens and twenties, but plenty of time, thus the much-anticipated weekend treasure hunt. My first real collection was that of mouthpieces for musical instruments. Each had a unique and fascinating form, and the brass and pewter of these mouthpieces always possessed a perfect patina. This collection still sits before me at my desk, surrounded by later and loftier acquisitions, but it has held up well. Sadly, though I struggled to find these pieces over the course of years and to this day recall many of the moments when and where I found them, in this world of instant gratification one can now buy them countlessly for a pittance on eBay. 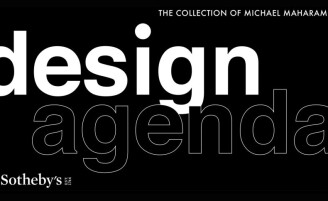 SA: You are now living in Italy, having left the apartment that you had for seventeen years in New York City. Your arrangements in that interior appeared relaxed and homey, neither too considered nor too cluttered. How important is it to live with the objects that you enjoy collecting?

MM: Once upon a time I lived in a showroom of an apartment, but thankfully Sabine came along, brought beauty into my life and used (and scratched and broke) everything in our home…and then I learned to properly appreciate my collection. And the hieroglyphics of three young children become points of nostalgia, as well. There are exceptions, and those who plunk down heavily on delicate chairs only do so once at the risk of further inciting my wrath!

SA: I detect numerous sub-chapters within the narrative of your collecting — for example the survey of important chairs by Gerrit Rietveld, or the organic stoneware structures of Axel Salto. How important is it to really investigate, in depth, the creativity of any artist?

MM: Homework isn’t really a prerequisite…it is a lazy luxury to be guided by one’s eye and this alone is sufficient. Expertise is a separate and often fascinating ambition, but it is definitely not critical to the conquest or pleasure of collecting.

SA: I’d also suggest that your collection is very tactile, inviting interaction with natural materials and revealing a real respect for patina. This is as much relevant to some of the more contemporary works, as it is to older, historic material - would you agree?

MM: I was always fond of the notion that there wasn’t a kilogram of plastic in our entire home…perhaps an exaggeration…but in the French sense of “avoir du poids” or to have weight as a point of seriousness, material substance (and weight) matters to me. I’m very discerning when it comes to collecting plastic, largely because it has limited potential for patina, and the range of textural possibility in natural material is so vast and appealing, from the industrial upward. Patina isn’t merely limited to antiquity…in fact, nuanced finish on new pieces is elusive. The properly polished stainless steel of Ron Arad is as beautiful as that of vintage Aubock.

SA: The most interesting collections are those that embrace different disciplines, consider varied materials, and can respect objects from all eras. In this way your collection crisscrosses effortlessly over time and medium, rather in the way the warp and the weft of a textile might seamlessly bind together. How important is it to have a holistic attitude to design, to collecting?

MM: Friction counts as does juxtaposition. We all suffer the desire to surround ourselves with coveted iconography and it’s tough to do so without falling into the trap of decorating cliche, but ultimately there’s fashion and then there’s style and it’s always a pleasant surprise to discover interesting dialogue between authorship, era, origin, and language.

SA: You established Maharam as the leading contemporary textile manufacturer, working both with the estates of noted multidisciplinary designers including Anni Albers, Charles & Ray Eames, Gio Ponti and Alexander Girard, as well as contemporary collaborators such as Hella Jongerius, Konstantin Grcic, and Sir Paul Smith, amongst others. There is a natural synergy here, with your collecting, I believe?

MM: In the past the most noted designers were few and easily distinguished from their lesser peers…and of course this all plays out historically by way of the timelessness of their work. All easy to discern in retrospect. This distinction is much more challenging to sort out nowadays given the present vastness of “design” and its digital ubiquity. Sorting the good from the less good was once a far simpler matter…today it’s more a case of the good vs. the great. Subjective hair-splitting. In choosing our collaborators at Maharam, we sought to complement our re-editions and to identify those contemporary contributors with a singular, identifiable and readily articulated language…Hella’s embrace of the imperfect, Konstantin’s distinctive use of geometry and technique and Paul’s fearlessness with color and feeling for whimsy, by example.

“Buy what you love, don’t overthink, say no more frequently than yes and spend painful sums when there’s something you believe in and can’t live without…sooner or later you will forget the price though you will always own the pleasure.”

SA: You once wisely observed that one "cannot collect without editing” — and I know that as a collector you have been a thoughtful and sensitive custodian of these works, now soon to be released back to the world. So now, as an “editor", are there works here that you feel especially privileged to have lived with, or that have memorable stories?

MM: The answer to this question is perhaps more one of seller’s remorse which only truly becomes evident in retrospect, though paging through the comp of this catalog I can’t help but feel nostalgia at the memories of friends and family enjoying this apartment…not for its contents, but for the natural ambiance of the place and the ease of being here. Sabine cooking Carbonara for thirty, and countless other meals for guests, the place full of people not paying attention to the collection but enjoying the ambiance it provided. Ultimately, this collection is about hundreds or perhaps thousands of auction catalogs hauled along on airplane rides and sitting by my bedside to be perused at bedtime year after year. Tedious as this sounds, it was a quiet pleasure…the most satisfying variety of shopping I can imagine. And the people who made it possible; in my youth the influence of neighbors with remarkable style, Renee Silverstein and Marilyn Brechner, the good fortune of friendships with truly avid and refined collectors; Michael Boyd, John Birch, Harry Hunt, Neil Logan, Andree Putman and Federico DeVera to name a few, and the many gallerists and auction house representatives who have guided me. In the end, I find that collecting is more about the journey than about the objects…which are simply the manifestation of the experience. For this I am most grateful.

SA: And, as you are now creating your exciting new home in Italy, what might the next phase of collecting look like?

MM: Trees at the top of the list…it doesn’t get better. And as a lifelong hoarder with a warehouse full to show for it, I’m now purpose-driven…a place for everything and everything in its place. Collecting is an incurable condition and one cannot stop so I’ll focus on the manageable; books and music…and a little Caccia Dominioni.

SA: My final question — if you were to retrace your steps to the beginning, to the early days of building this collection now to be sold — would you have advice that you would like to share with new or developing collectors?

MM: Buy what you love, don’t overthink, say no more frequently than yes and spend painful sums when there’s something you believe in and can’t live without…sooner or later you will forget the price though you will always own the pleasure.