By RM Sotheby's
A pair of Vector prototypes are heading to RM Sotheby’s first auction of 2019 – Arizona . Though seldom-seen and perhaps not your mainstream supercar, the Vector marque is loved and appreciated by enthusiasts around the world for its stunning futuristic design and outlandish performance.

V ector; a cult classic, a cars & coffee fan favorite, and the very first all-American supercar. For Gerald “Jerry” Wiegert, the wedge-shaped Lamborghini and Ferrari sports cars of the 1970s were more than a passing interest. After completing his studies at the Art Center College of Design in Pasadena, California, Wiegert started a design firm called Vehicle Design Force with the intention of building a wholly American supercar. 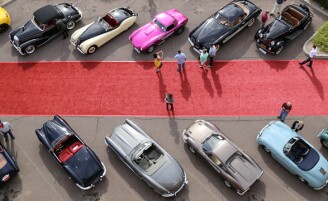 Born from a small warehouse in Los Angeles’ Venice neighborhood, the Vector W2—its name derived from Wiegert’s last name and from its twin-turbocharged V-8 engine—boasted a cutting-edge design that wowed show-goers for more than a decade while its builder raised funds to put it into production. Car & Driver said of the W2 that it was created “the way you’d build a Formula 1 car if you could afford to.”
Wiegert’s day finally came in 1989 when production started on the Vector W8, America’s first supercar. Its design benefitted from massive leaps forward in computer engineering and the materials Vector used to build the mid-engine, rear-wheel-drive sports car were cribbed from the aerospace industry. After all, Vector referred to itself not as an automaker but as the Vector Aeromotive Corporation. The W8 was also ferociously fast. One reportedly hit 242 mph on the Bonneville Salt Flats in Utah. Nearly two dozen were built and at a price of nearly $450,000 in 1990, allowing Wiegert to turn his focus to its successor – the WX-3.

The Avtech WX-3 prototype was to preview a production car when it was first displayed at the 1992 Geneva Motor Show. Initially a mere showpiece, the WX-3 prototype owed its advanced composition to the W8, including carbon fiber and Kevlar. Though its profile was angular, the WX-3 had streamlined, curved bumpers and cut lines that marked it as a product of the early 1990s. Inside, the WX-3’s interior was far more refined, but still shared its airplane cockpit control arrangement with the W8.

A year later, Vector had more to show at the 1993 Geneva salon. By then, the company had wedged its twin-turbo Rodeck 7.0-liter, 1,000-hp V-8 behind the passenger compartment and repainted the WX-3 the Brilliant Aquamarine it wears today. After putting these finishing touches on the mind-blowing show car, the final cost to develop and build the WX-3 prototype coupe had reached $1,000,000!

It was joined by the open-top purple WX-3R, also set for RM Sotheby’s Arizona stage, at the automaker’s California modern-themed stand at the motor show. Wiegert chose the teal and purple hues because they matched the logo of his Aquajet jet-ski firm. While sharing many attributes with the prototype coupe, the roadster had an even more streamlined appearance due to an almost unfathomably raked windshield that wrapped into its side windows bisected by a section of the door skin. Its interior featured highly bolstered individual bucket seats draped in grey leather rather than the wide, European-style three-wide seating in the coupe.

Due to a hostile takeover attempt by Megatech, the Indonesian company that owned Lamborghini at the time, the WX-3 never left the prototype phase and Wiegert would lose control of the company he’d worked decades to build. After a court battle, Wiegert was able to retain ownership of the WX-3’s design, which prevented Megatech from ever producing the vehicle. In the end, the WX-3 coupe and WX-3R roadster were the last all-American Vector examples completed.

Although it never made production, the WX-3 was well-received by media at its teaser introduction in Geneva, as it represented the very best of America’s first supercar and offered enormous potential for the future. The Vector is to early 1990s technological innovation what the Tucker 48 was to the post-war dream cars of the 1950s. These cars represent one man’s (and perhaps every car guy’s) age-old American dream to build their own automobile.

The Vector WX-3s have wowed attendees at numerous car shows in the last 25 years, exhibited by Jerry Wiegert, who retained ownership of both the coupe and roadster prototypes. With the current ‘Radwood’ 80s and 90s car culture movement, the Vectors are becoming continuously more appreciated, and often steal the spotlight wherever they appear. Exceedingly rare, emblematic of their period, and never before presented at auction, the offering of the Vector WX-3 Prototypes in Arizona is an opportunity not to be missed.

See the Vectors for yourself at the Arizona Biltmore Resort & Spa in Phoenix. RM Sotheby’s Arizona exhibition opens 16 January.