Touring China in the Footsteps of Wu Guanzhong

By Sotheby's
中文閱讀
A visual travelogue of the French-trained artist depicting the wonders of his home country.

I n 1950, Wu Guanzhong went home after pursuing studies in Paris, hoping to sketch the new look of China with his new forms of artistic expression. Carrying his tool box on his back, he travelled across the country and depicted the great land with his uniquely invigorating form of art that blends western techniques into traditional ink painting.

In 1990, the artist was invited by the Land Development Corporation in Hong Kong to record his impressions of the modernized city – a place uniquely blending both the East and the West. The artist made a number of sketches of the city, including the to-be-demolished Cloth Alley in Central, a garment market opened since the early 20th century. These sketches, unusually coloured and realistic in form, serve as an excellent example of how a creative thought is stimulated in the artist’s mind.

I do love the charisma of these old streets. They remind me of the happening markets in my home town where I, as a teenager, was used to merely wander around as I had no money to shop. Today as I am sketching the streets of Hong Kong, my childhood dreams are fulfilled by my brushes. Hong Kong’s narrow and densely populated streets bear certain resemblance to the narrow alleys depicted by M. Utrillo but without a touch of melancholy. The modern architecture – straight lines, curves, clear surface, edgy roads, blade-like roof – is a symphony, a fierce battle, or a disorganized essay. It is up to the artist to construct the glamorous world unfold upon him.

In October, the icy wind howls in the north. I rushed to the Loess Plateau in Hequ county, hoping the chill of plateau wind could clear my mind of the city fever. Rural villagers get simple pleasure in their lives, a thing street adventurers in New York would never experience. The vast Loess Plateau is uniform in colour and the only thing that stands out is the undulating mountain chains – they stand for happiness, anger, numbness… The golden resource is out there for everyone to judge and assess…Mountains in pale yellow, rivers in brownish yellow; cattle and goats scattered on the wind-blown meadow…

Featuring vibrancy of spring blossoms with a snow mountain in the background, this painting is likely to be inspired by the landscape of Yulong Mountains in Yunnan province, a place Wu Guanzhong visited to sketch in the late 70s. The artist attested to the exuberance of brushworks splashes of colour dots and lingering strokes.

Dots and lines mingle with each other waywardly – not rivalling for spring yet come ahead of spring.

In the 80s I took a boat to Zhouzhuang. It was as if I landed on an isolated island – it was a town surrounded by water with no sight of car. On my way to discover this bleak place, I saw a row of bridges with boats resting along the riverbank. To fully sketch this place, I settled down at the only hotel in the area. I climbed up the wooden staircase – unleashed upon me was a picturesque scene of black roof and white walls along meandering rivers, with frolicking geese and dusks beneath swinging willows at the riverside.

Paradise is a place of belonging without any stress. I have heard that there is a “Bird Paradise” in Xinhui county, Guangdong province. It is a thick forest that sheltered hundreds of birds. Branches as intertwining lines, bird flocks as scattering dots - it should also be a paradise for painting. I cannot wait to visit it. Finally I went to the “Paradise”. In the early 1989, I visited “Bird Paradise” on my way to Guangzhou from Macau. After rain, roads became muddy and trees clouded in mist. The island of forest seemed nothing special. I was deceived by the gullible title of “Bird Paradise” given by Ba Jin...

Looking at the forest from afar, the dense foliage shrouded both the branches and birds. My friend fetched a sampan and sailed towards the “Paradise” amid heavy rain and gusty wind. Only then did we realize the Banyan branches were interweaving like different styles of calligraphy. We sailed into the grove and set our foot on the island, which startled the birds and the whole flock flew up into the air. After the chaos, the “Paradise” is gone. I returned home and painted “Bird Paradise”, highlighting the entwinement and spatial organization of lines. It is indeed a paradise of these unknown colorful birds as long as they can hide and come out as spontaneously as they like. 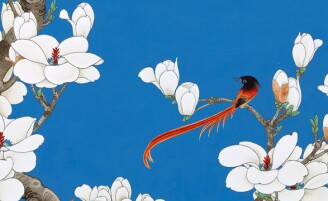