T hese striking neo-classical sauce tureens and covers on stands, currently available for bidding online, were made for the English landowning gentleman William Wrightson (1752-1827), of Cusworth Hall, Yorkshire in 1787 while he was M.P. for Aylesbury (1784-1790). The set, which originally consisted of six matching sauce tureens of this size, together with two larger soup tureens on stands, would have adorned the dining table at fashionable dinner parties hosted by the M.P. and his first wife Barbara Bland.

Silver engraved with the family coat-of-arms and crest of the owner was an important status symbol of the 18th century. Not only was this a large suite, but the sleek boat-shaped profile of the tureens, the fluted covers and bodies and the acanthus leaf-capped ends, firmly place it in the third-quarter of English 18th-century taste. The modern usage of silver or ceramic sauce boats or tureens as an integral element of a dinner service probably derived from the late 17th century French Court fashion. Double-lipped two-handled silver sauceboats were recorded in England as early as 1690 and by the late 18th century the popular sauce boat form was overtaken by the sauce tureen.

Aside from their elegant form, these sauce tureens function just as well today as they would have over 230 years ago when they were made. While an open single or double-lipped sauce boat cannot retain heat, the tureen style with a cover and stand will serve that purpose more effectively. In addition to holding hot sauces such as gravy, sauce tureens were also used to hold mustard and other cold accompaniments to meat. 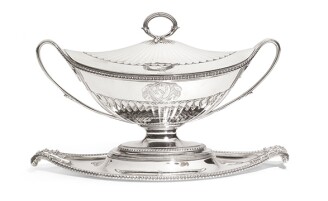