T he United Synagogue was formed by an Act of Parliament in 1870 when three major Ashkenazi synagogues in the City of London - The Great, The Hambro’ and The New, and two West End synagogues - the Central and Bayswater joined together. The vision of Nathan Meyer Rothschild in 1823 and then Lionel Louis Cohen and Chief Rabbi Nathan Marcus Adler to unify and strengthen London Jewry was realised. The first US president, in 1870, was Anthony de Rothschild and the presidency was then held by successive generations of the Rothschild family right up to 1942.

Representing central Orthodox Judaism, with some 60 congregations, comprising 40,000 members, the United Synagogue is the largest synagogue body in Europe with the Chief Rabbi of the United Hebrew Congregations of Great Britain and the Commonwealth the spiritual head.

The United Synagogue is still the only Jewish religious body established by an act of secular legislature and is hugely influential with communities in London and across the UK.

T he Central Synagogue resides on the site of a warehouse at 120 Great Portland Street in the West End of London that had been consecrated and used as a branch synagogue of the Great Synagogue since 1855. In 1868, Sir Anthony de Rothschild presided over a meeting, which approved the funding to erect a new building. A sum of £12,000 was promised and a Moresque style was agreed upon for the building; the architect N. S. Joseph was later selected. On March 18, 1869, the foundation stone was laid by Baron Lionel de Rothschild, M.P.

The new building was consecrated on April 7, 1870 by the Chief Rabbi in the presence of a large congregation. The Ark was opened by Sir Moses Montefiore, then eighty-five years of age. A few months later, on July 14, 1870, the synagogue received the Royal Assent and the Central Synagogue became an independent constituency no longer under the aegis of the Great Synagogue. The first wardens elected were Baron F. de Rothschild and Mr. B. Meyers.

The Synagogue quickly became prosperous and in the first year had let 365 gentlemen's seats and 269 ladies' seats. By 1872, the Synagogue boasted membership of five M.P.'s, six Barons, two Aldermen of the City of London, the Solicitor-General, and one member of the Royal Academy. In 1881, H.R.H. the Prince of Wales visited the Synagogue to attend the wedding of Mr. Leopold de Rothschild. He visited again in 1898 for the service in memory of Baron F. de Rothschild.

The synagogue remained notable, but World War II brought destruction when the building was bombed on May 10, 1941. Due to difficulty obtaining a building license for a permanent Synagogue suitable to replace the former building, a temporary Synagogue was built instead and consecrated on September 30, 1948. When the licensing restrictions were lifted in 1955, it was decided to rebuild a new Synagogue in keeping with its earlier history and dignity.

The building of the new synagogue would cost £210,000, a figure that did not include the furnishings and fittings. Part of the cost was covered by the War Damage Commission, but most of the funds were raised by the members of the congregation. The new building would have a minimum seating capacity of 500 on the ground floor and 400 in the Ladies' Gallery, as well as a 2000 square foot assembly hall below the synagogue.

The rebuilt Synagogue was consecrated on March 23, 1958 and led to a renewal of its prominence. The membership increased by over 100 new constituents in the first year, and the Synagogue was upgraded in status to Class One of the Constituent Synagogues of the United Synagogue. The congregation expanded further throughout the 1960's and 70's totaling over 800.

The history of the Central Synagogue has played an integral part in the life and activities of the Jewish community in London. Its archives are full of important figures who have contributed enormously to the welfare and prosperity of the Jewish and wider community. It serves as a proud landmark to Anglo-Jewish history. 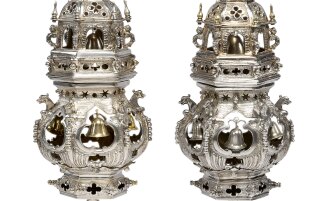