Exploring the "Jewish Alps" Through Postcards

"W e're going to the Catskills!"

This line, made famous by the exuberant television character Midge Maisel in the second season of Amazon Prime’s hit series “The Marvelous Mrs. Maisel,” evokes the summer tradition once practiced by an entire generation of Jewish New Yorkers: a pilgrimage to the Catskills.

The Catskill Mountains, known simply as “the Catskills,” comprise a lush, mountainous region of southeastern New York State. From the 1920s up through the 1970s, the Catskills were a popular vacation destination for New Yorkers hoping to escape the humid city streets – especially Jewish New Yorkers, many of whom felt unwelcome at Gentile-owned, often antisemitic establishments.

A number of Jewish-owned resorts sprung up along the shores of the Catskills’ picturesque lakes and rivers, soon earning the area nicknames including the “Jewish Alps” and the “Borscht Belt” (the latter a reference to the Eastern European soup made with beetroot). For years, postcards from these famous destinations filled mailboxes across the country, corresponding the highs and lows of another summer in the Catskills.

And surely, the Jewish Alps offered ample opportunity for memorable moments. Each hotel had the latest modern amenities, including beauty salons and barber shops, as well as countless avenues for summer recreation. Tennis, rowing, bocce ball, scenic hikes, ballroom dancing – there were more than enough activities to fill any July day.

But the best part was the evening entertainment. New York’s finest Jewish entertainers, including comedians Woody Allen, Joan Rivers and Jerry Seinfeld, traveled from resort to resort performing for the guests. Song and dance performances were also commonplace, as noted in the movie Dirty Dancing, which is set in an upscale Catskills resort.

On 5 June, Sotheby’s New York will offer an Important Collection of Postcards from American Jewish Hotels and Resorts [United States: Early to Mid-20th Century] in the Important Judaica sale. The collection comprises 297 postcards (each approx. 3 1/2 x 5 1/2 in.; 90 x 140 mm) on paper from some of the most well-known resorts, including the Concord, the Flagler, and Grossinger’s.

While some of the cards are blank, others are scrawled with notes in English, German, Hebrew, and Yiddish. On one, the writer notes that “the scenery is terrific!” at the Swan Lake Mansion.

Today, the heyday of the Borscht Belt is only a memory. The advent of the jet age made it easier to travel to more exotic destinations, and the Catskills fell out of fashion. Many of the grand resorts fell into bankruptcy, were sold, or were simply forgotten. What remains are postcards, each offering a technicolor snapshot of a bygone era. 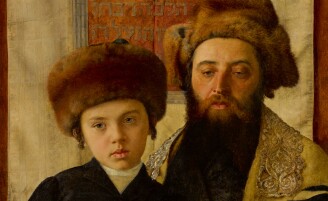