The Unassuming Genius of Marc Newson

H aving a genius for a friend is wonderful but it also comes with dangers. I am fortunate enough to count Marc Newson as a friend. We first met in a professional capacity in the 1990s, as interviewer and interviewee. Over the intervening quarter century he and I have come to know each other a little better, as he has become a presence in most branches of material culture: turning his remarkable gifts with equal facility to timepieces, shotguns, training shoes, fountain pens, luggage, knives, surfboards and jewelry.

But as well as becoming familiar with the body of work, I have come to know the man. If you know Marc only a little it is impossible not to like him, his sense of humor is superb, enhanced by a deadpan Antipodean delivery and his appreciation of the surreal and absurd is quite beautiful – there is no other word for it. I was with him once in Udaipur, a city of lakes alive with the sort of Mughal charm that inspired Brighton Pavilion, where his greatest delight was to find a shop fascia that announced the availability of ‘Live Kebabs.’ I have bumped into him at a hog roast lunch during the Mille Miglia, I have been to stay with him at his house in the country, and it is in such intimacy the danger lies.

To share a Sunday morning breakfast table with someone, especially someone who is as agreeably informal and such good company as Marc, is to risk seeing him as a man, rather than as a genius; so the sale at Sotheby’s of three masterpieces at Sotheby’s in Paris and New York, an Orgone Chair and Orgone Stretch Lounge and a Pod of Drawers, is a useful reminder of how significant his work is and how much more important it will become. Here the work speaks for the man and, unencumbered by Marc’s informality of manner, his humour and his self-deprecation, it talks eloquently of his genius.

Marc Newson is important. So much is evident by that most vulgar of barometers – the price of his works. Over the first decade and half of our century his famous Lockheed Lounge soared from $105,000 to £2.4 million, making him the most expensive living designer and placing him exactly where he belongs in the front rank of living contemporary artists.

The three early works coming up for sale are crucial to his oeuvre as they are documents of his development as a designer (and artist). The earliest of these, the voluptuous three legged Pod of Drawers, is a visitor from what we might call his Bateau Lavoir period. Just as Picasso spent his mid 20s freezing in the Bateau Lavoir, so Newson, in 1987 aged 24 and living in London, erected a tent in the back yard of his rented flat in which he built the mould, working in weather so cold that he resorted to hairdryers to dry the fibreglass form onto which he rivetted the aluminium in the relative warmth of his bedroom. Only years later was the mould shipped back to Australia where the edition was produced by hand over the course of the many years. It is a piece of remarkable maturity given that he had enrolled in Art School to train as a jeweller just five years earlier.

Although a canonical work in its own right, part of the fascination of Pod of Drawers lies in what Newson was moving from and what he was moving towards. It shows him moving out from under the colourful shadow that Memphis had cast over him as a student. The surface of hand-riveted patches – rather than panels – of aluminium shows a confidence remarkable given the fact that this was just his second piece in rivetted metal. The Pod of Drawers is a development of the style and technique that had created the influential steampunk neo-classicism of the LC1 chair that borrowed from the idiom of Directoire salon furniture, yet executed it in the style of mid-century aircraft construction.

Whereas the LC1 was ‘upholstered’ in aluminium, on the pod of drawers the metal is used as marquetry, creating a tension between the quotations from the visual langue of the maître ebeniste and the homemade industrial quality of the emerging Newson style. It is a work that openly references Andre Groult’s celebrated Chiffonier Anthropomorphe of 1925, while also mediating Groult’s somewhat dainty, slightly kitsch surrealism through the use of a self-consciously industrial material. The result is a work that was the bridge over which Newson travelled from the LC1 to the gleaming three-legged cultural phenomenon that is the Lockheed Lounge; Newson’s pickled shark.

Without the Pod of Drawers there would be no Lockheed Lounge and without the Lockheed Lounge there would be no Marc Newson. And indeed the lounge is a form to which Newson would return frequently in his early years and by the time of the 1993 Orgone Stretch Lounge there is a more resolved feel to the work. The ideas for the Orgone had been entertained as early as the 1980s, but his practice, and resources, at that time were not such that he could realize them.

With the Orgone lounge and chair made just a year later the pieces appear as rippling forms of smoothly tumescent curves that swell and taper with balletic elegance. Legs, seat and back are inseparable in the sculptural and playful organic polished aluminium object which play with the light and reflect its surroundings with distortive properties that suggest a large hollow blob of mercury, albeit one that has been frozen and dissected. 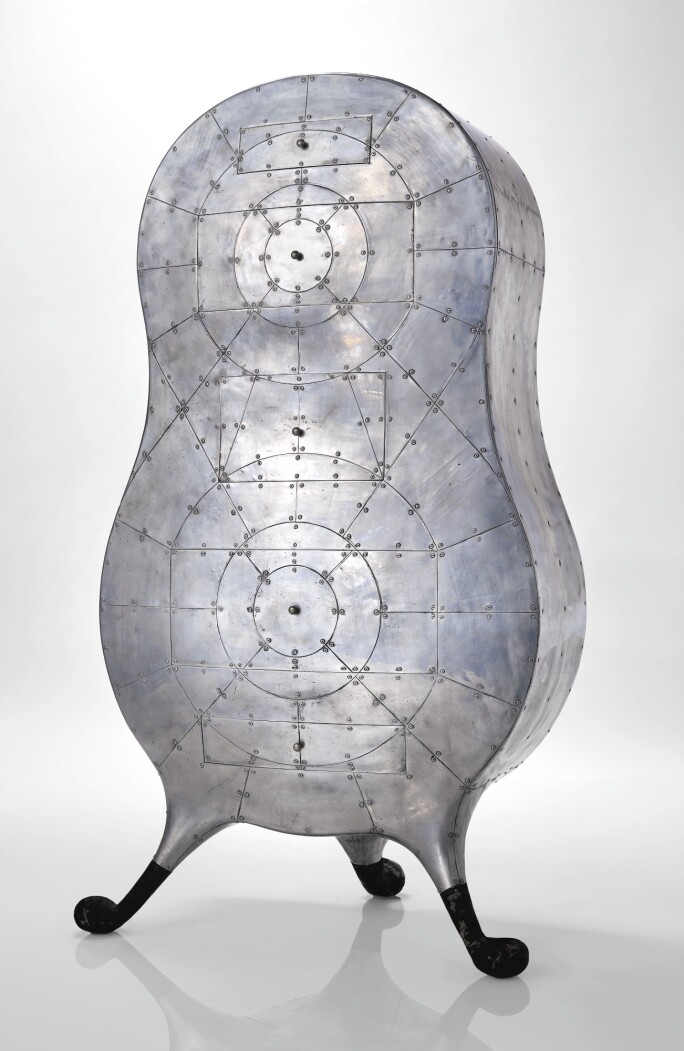 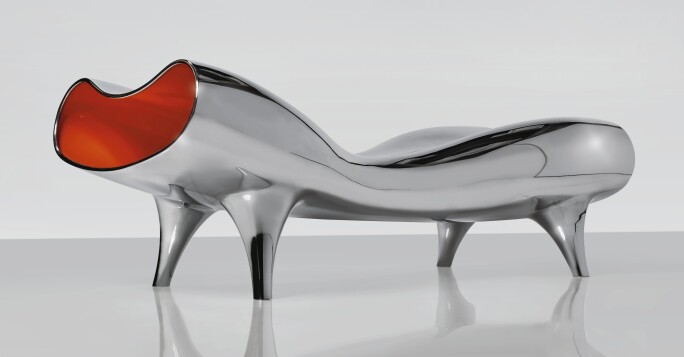 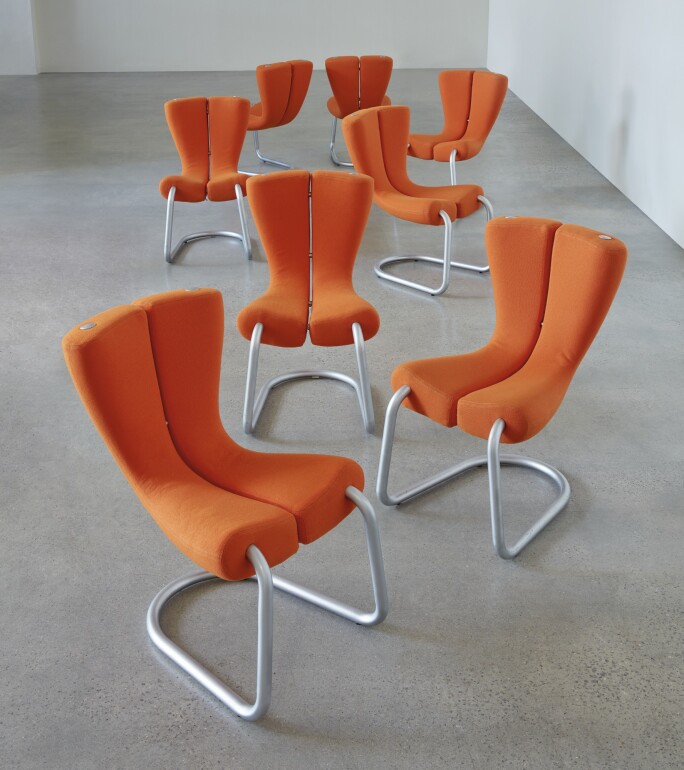 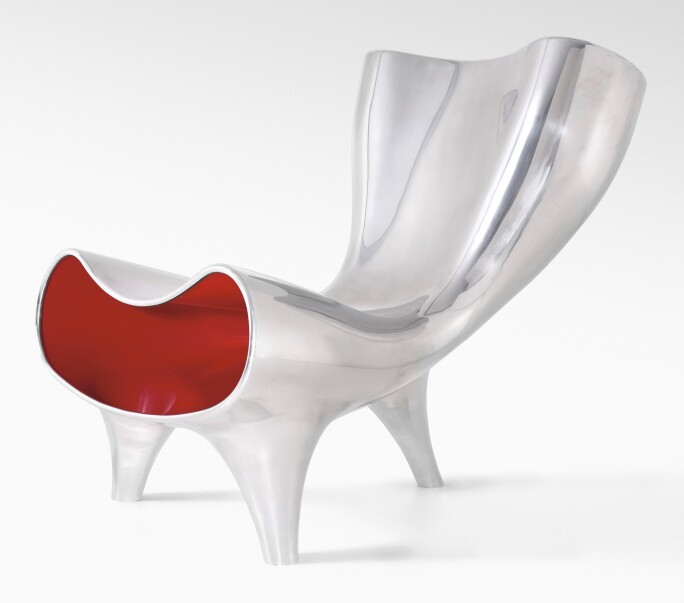 Instead of flaunting the rivets of his early pieces, so evocative of early industrial manufacture, this is an object that in its organic abstraction and the slick perfection of its external and internal surfaces, marks the emergence of the timeless fluidity of the Newsonian aesthetic; an aesthetic that was to define his oeuvre and one that has shaped the course taken by the turn of the century design.