The Triumph of Painting: The Steven & Ann Ames Collection

Rarely in a generation is a collection formed with a level of insight, intellect, and passion that can capture with crystal clear precision the essence of greatness in the art of one’s time. The Triumph of Painting: The Steven & Ann Ames Collection is exemplary in this regard, a true collaboration assembled and honed over decades of looking, studying, conversing, searching for the best, and knowing when in its presence – an ultimate fusion of thinking, feeling, and fulfilling. It is a collection about painting, its grand and heroic rebirth in a period that might otherwise have seen it as anachronistic, and captures historical significance with scholarly rigor, personal passion and, yes, faith.

Steven came from a family with a celebrated history of collecting: his maternal uncles and aunts were renowned patrons and philanthropists from the Annenberg publishing family. To this day, Walter Annenberg, Lita Annenberg Hazen, her husband Joe Hazen, and Enid Annenberg Haupt are widely regarded as leaders of twentieth-century arts collecting and patronage. From a young age, this abiding love for the arts and art history, as well as a deep regard for all cultural objects, was instilled into Steven. He would hold this cultivated passion close throughout his life; and together with Ann, he began collecting in earnest in the mid-1980s. So enthralled and enraptured by the art that he encountered during this critical decade – particularly the paintings of Gerhard Richter – Steven decided to return to Columbia University, where he attended Law School twenty years earlier, to pursue a Master’s degree in Art History. Like a true scholar, this undertaking was done purely out of love for the material and is one of the most awe-inspiring indicators of Steven’s ineluctable passion. His thesis, submitted in 1994, is a thoughtful and incisive analysis of the influence of photography on Richter’s art. This text is so utterly demonstrative of the unassailable interest and abiding thirst for knowledge that described Steven’s character, we have chosen to publish it in full in this catalogue; it does more to demonstrate just how extremely special this selection of works is than my words ever could.

The result of such a passionate, intellectual outlook is that every work in The Steven & Ann Ames Collection is a foremost example by a great artist – assembled with the highest level of taste and selectivity. Together, the collection tells a story about painting in our time, about greatness in collecting, and about the world and spirit in which the art had been made.

More specifically, the collection focuses on the central struggles and achievements in painting over the last decades: battles between and coexistence of gestural abstraction and figuration; the roles of the replicative capacity of photography and the process driven nature of painting, and how these two often polar approaches have influenced one another to transform painting in the last fifty years. The two principal lines of the collection, insightfully, center on de Kooning and Richter: de Kooning having struggled with and, ultimately, broken from the overriding impact of Cubism on composition throughout the first half of the Twentieth Century; and Richter, reinventing abstraction again in the last decades of the century, by creating a methodical and mechanical approach to painting and through it, redeploying painting as a formally advanced emotional and interpretative form of expression.

It is no accident that the Ames collection includes fantastic works by de Kooning spanning six decades, and thereby delineating one of the most historically significant struggles and achievements in the history of Modern Art. Moreover, as resounding testament to true connoisseurship, the works vary in scale from the finest intimate gem to the most important grand scale canvases.  Equally remarkable are the three monumental masterworks from Richter’s celebrated corpus of Abstrakte Bilder, each dating from one of the three most historically critical years of this groundbreaking aesthetic exploration – 1984, 1986, and 1988 – and each bearing its own unique palette, mood, and presence. Not to be overlooked, Steven and Ann’s grisaille photographic painting of 1966, Familie Hötzel, is, like the finest of Richter’s works of this core period, as though an apparition of a memory has materialized within a Polaroid frame; Grau of 1974, is likely the juiciest example of its type I have seen, its gray so rich and deep, its surface raging, like the wind; Venedig, a painting of Venice that defines in a most singular way the meeting point of representation and abstraction that is indeed the internal discourse of Richter’s artistic life; and Landschaft of 1992, one of the most enigmatic of the artist’s great landscape paintings, with nature somehow sandwiched between layers of light and dark (exploring the photographic in an even more sly way than earlier in the artist’s development).

There are so many other distinctions in the Ames collection worthy of notation:  the two paintings by Ryman— sheer perfection; the transatlantic struggle in the 1960s and 70s, as typified by the works of Baselitz and Guston, between abstraction and representation, the physical act of painting and the psychological expression of the self; and the leading artistic achievements of younger generations, be it in the representations of Condo and Prince or the abstractions of Hodges and Grotjahn.  In the end, what we find most impressive about The Triumph of Painting: The Steven & Ann Ames Collection is the economy with which this team understood and represented the most essential achievements in painting over the last sixty years, with pathos, precision, and personal passion. 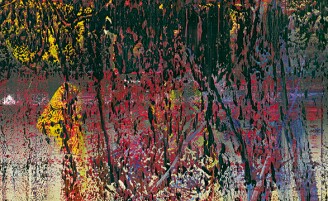