The Trick of the Trinkspiele

F or centuries, German aristocracy has pursued the fine art of drinking, a pleasure perfected to the point of refinement and, it appears, not a little amusement. As a 17th century tumbler cup to be offered at Sotheby’s London illustrates, the German tradition of trinkspiele – or drinking games – was the height of sophistication and fun in the halls of countless schlösser.

Christian Hornung’s elegant silver parcel-gilt cup hides a joke with a messy punchline. “The tumbler looks ordinary but has a purpose-built drainage hole in the base hidden when held normally,” explains Sotheby’s silver specialist Harry Charteris. “As wine is poured in, the liquid remains in the cup until it reaches a certain height. If the drinker is a bit greedy and insists on filling it up too high the pressure forces the liquid up the cylinder where there is an evacuation tube which allows the liquid to drain from the hole in the base soaking the drinker with wine.”

Elaborate engineering was often involved in creating trinkspiele. At the Boston Museum of Fine Art, an example of such expert craftsmanship, by Joachim Fries, stands proudly on the shelves of the Kunstkammer Gallery. And sometimes it does more than stand. This early-17th century wine-carrying courtly automaton – styled as Diana, Roman goddess of the hunt, riding side-saddle on a stag while commanding two hunting dogs – is mechanized to travel around the table, delivering wine decanted from the figures of the stag and one of the hounds. “Propelled by an internal wind-up motor, the automaton would zig and zag across a banquet table,” the museum enlightens admirers. “When she came to rest in front of a gentleman, he lifted the stag off the base, removed its head, and drained it dry. If it stopped in front of a lady, she did the same with the dog.”

Conservator Susanne Gänsicke worked on the piece’s restoration for more than a decade. Eventually, in 2014, her team had the stag back at the gallop. “I cannot envision how people would’ve been able to lift this whole thing — and drink from it — without spilling wine over your fabulous dinner clothes,” Gänsicke noted.

Another extraordinary trinkspiel appeared at Sotheby’s London in 2018 billed as “the ultimate drinking game”. Hans Maulbrunner’s masterpiece, made in Augsburg (circa 1614-1616) included a gadrooned cup engraved with bunches of fruit and garlands ending in a funnel, surmounted by a watermill with a Neptune-shaped finial, over which was an ornate six-cupola-shaped cup, engraved with birds and fruit, positioned on three feet. Inspired by the wedding feast at Cana (Gospel according to Saint John, 2,1-11), it involved a complex mechanism which gave the perfect illusion of turning water into wine.

The term trinkspiele is perhaps a little misleading – these are not the drinking games of frat boys, toga parties and barrels of beer. The culture of trinkspiele was driven by a Renaissance fascination for craftsmanship, often featuring allusions to classical themes. It was part of the game of society.

Indeed, as Charteris observes, the intention with Christian Hornung’s cup was to promote good conduct rather than hedonism. “Once started gravity drains all the liquid and the whole process can start again to the great amusement of 17th-century drinkers,” he notes. “There is a gentle moral element typical of 17th century drinking vessels. Moderation!” 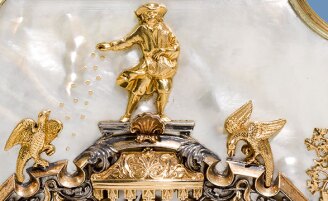