H ow could a 26-year old artist make his name in 1870s Paris? When Henri Gervex completed Rolla in 1878, an important variant of which features the 19th Century European Paintings sale on 25 May, he was already a friend of Manet and Degas. He had even been painted by Renoir as one of the dancers in Dance at Le Moulin de la Galette.

But rather than show with those artists in the Impressionist exhibitions, Gervex was committed to the official annual Salon, where in theory he had won the privilege to participate without risking rejection by the selection jury. However, in April 1878, before the Salon opened to the public, Gervex’s Rolla was found to be immoral, and was pulled by the superintendent, Edmond Turquet. The painting is perhaps the most famous 'morning after' scene in art history. Taking as his inspiration a scene from Alfred de Musset’s poem published nearly 50 years before, Gervex depicted a chic Louis XVI interior in contemporary Paris. Jacques Rolla, wealthy but now bankrupted by his debauched lifestyle and on the verge of suicide, has spent his final night with the young courtesan Marie. While Rolla plans to end his life, Marie luxuriates.

Gervex was undeterred and inspired by Manet’s decision to exhibit his Nana, another scandalous depiction of a literary courtesan, after its rejection from the Salon the previous year, Gervex opted to show Rolla at Bague’s gallery on the fashionable Chaussée d'Antin. The whole of Paris came to see it and what followed is one of the great succès de scandales of 19th century art.

While it might be expected that it was the beautiful nude figure of Marie which scandalised superintendent Turquet, in fact Marie herself would have looked at home among all the other academic depictions of the female form at the Salon. She is after all a direct quote of Cabanel’s Birth of Venus, a favourite painting of Emperor Napoleon III. Instead it was the heap of clothes in the lower-right which shocked contemporary viewers. Degas had recommended that Gervex incorporate this still life, which appeared to tell viewers all they need to know: red corset splayed open showing its white lining, suggestively protruding cane, and an overturned top hat at its summit. When the painting was ordered to be removed from the Salon, Degas declared: “You see… they understood that’s she’s a woman who takes her clothes off.”

By 1926 Rolla had lost some of its shock value, and thanks to a bequest the painting entered the collection of the French state. Gervex’s original is a highlight of the Splendeurs et Misères exhibition which opened at the Musée d’Orsay and is now on view at the Van Gogh Museum; it was previously seen at the Impressionism, Fashion, and Modernity exhibition in New York, Chicago and Paris in 2012–13.

Testament to the fame of Rolla, it is likely Gervex painted the variant featured in the sale for a patron who wanted their own piece of the scandal. At just over a metre across this variant is more conventional in scale than the large original, while reprising its details and palette with only minor variations. 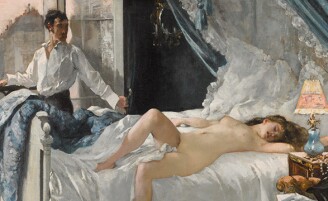