The Rise of Basquiat

NEW YORK - He was an overnight sensation and then a superstar, anointed by no less an authority than Andy Warhol. He broke the colour barrier in the contemporary art world and had collectors lining up for his expressive, often vibrantly coloured but psychologically dark paintings. He also abused drugs for years, succumbing to an overdose at the tender age of 27.

But 25 years after his premature death, Jean-Michel Basquiat is more than a cautionary tale. As much as his complicated life continues to intrigue, his paintings – with skeletal figures, language, erasure and elements of graffiti, scribbling and cartooning – continue to be relevant. Collectors routinely pay millions of dollars for his canvases, and believers do not hesitate to compare him to some of the most towering figures in the canon. “His work is based on classical painterly language, from Matisse through de Kooning, Rauschenberg and Wifredo Lam,” says Annina Nosei, the first art dealer to give him a solo exhibition and now an art historian. “The way some parts are covered up by colour and others disclosed by colour – this is better than Twombly in my opinion.”

The collector Peter Brant, who began acquiring his work not long after being introduced to him by Warhol in 1984, is even bolder. “Jean-Michel Basquiat is the quintessential Van Gogh figure of our time,” Brant says. “He left with us a genius body of work.”

Tragic and talented, to be sure. But much of the popular mythology surrounding Basquiat – that he went from sleeping in cardboard boxes in the park and tagging graffiti in downtown Manhattan to the top of the art world, then crashed from the sudden influx of cash and fame – is an oversimplification of a complex life.

His father, Gerard, an accountant, was a Haitian immigrant, though from an affluent family. His mother, Matilde, was Puerto Rican. Basquiat depicted his family as highly dysfunctional – Matilde struggled with mental illness; Gerard, who had custody after he and Matilde divorced, practiced corporal punishment – but they were neither poor nor uneducated. Basquiat and his two younger sisters grew up in a solidly middle-class home in Brooklyn. A bright, ambitious child, he nevertheless floundered, became heavily involved with drugs and ran away from home. He infamously threw a pie in the face of the principal of his high school, which catered to struggling teens who had shown potential.

But it would be inaccurate to call him directionless. He drew and wrote and started hanging around the School of Visual Arts, where students Keith Haring and Kenny Scharf befriended him. His ubiquitous and poetic SAMO graffiti – which stood for “same old shit” – scrawled on buildings downtown first brought him the wider attention he seemed to desire. But he never considered himself a graffiti artist, Nosei says. Graffiti, he told her, was merely fashionable. He did not fit the stereotype of a juvenile delinquent with a spray can, and he was no naïf.

When she first met him, Nosei recalls, “he was particularly cultivated, even though he was [20]. He had read everything. He was way more sophisticated than all the others his age. He was a genius. You can see from his paintings his knowledge of modern art.

“He gave me as a present for my birthday a book on Marcel Duchamp,” she continues. “What American kid knows Duchamp?”

Nosei had been struck by his work in the landmark “New York/New Wave” group show of unknowns at the alternative space PS1 in 1981. “Even the scribble showed ability, knowledge and talent that was distinguishing him [from the others],” Nosei says. She called his family’s home in Brooklyn trying to track him down and finally found him at his girlfriend’s. Since he couldn’t afford canvas and paint, he had only drawings to show her. “I told him he could paint in my basement,” she says. “In the back part there was a skylight and two windows. I gave him some money to buy canvases. In a really short time, he painted fantastic canvases.”

His first solo exhibition, in March 1982, sold out. Basquiat was 21. He was also an instant celebrity, with an impish hairstyle and a print-ready back-story.

As is true with most artists, there is a particular infatuation with Basquiat’s early period, during which he was extremely prolific. Writing in The New Yorker on the occasion of a major Basquiat retrospective at the Brooklyn Museum of Art in 2005, Peter Schjeldahl called him a “painter to the core” and marveled about his graphic, graffiti-laced canvases from 1982: “You can’t learn to do this stuff. It’s about talent, served by commensurate desire and concentration – and joy.”

Larry Warsh, a collector turned author (Jean-Michel Basquiat: The Notebooks) who later served on the authentication committee for the artist’s estate, remembers begging family members to help finance his initial acquisitions. “It was about the energy, the language, the presentation, the spontaneity, the freshness,” says Warsh, who still owns a substantial trove of Basquiats. “It stands the test of time. There’s a visual language that’s a combination of frenzy and communication, and a portrait of the moment.”

At a time when there were few black artists visible on the scene, Basquiat chose as his subjects black athletes like Jesse Owens or musical heroes such as Charlie Parker. Other works, including Slave Auction and Hollywood Africans, dealt with black history. He painted his experience as a young, black man in America. But in a 1985 catalogue essay, Yale art historian Robert Farris Thompson cautioned, “Because he is black and because he is young some critics will not be able to resist the temptation to link Basquiat to the more obvious forms of New York black and Puerto Rican street art. However Basquiat, though fiercely loyal to his local black friends, remains an avatar of a universalizing vision... In his hands black vision becomes at once private, public, didactic, playful, serious, sardonic, responsible and, above all, deliberate.”

Basquiat also seems to have been acutely aware of the bigger picture. In a 1986 interview for a documentary, he says, “Black people are never really portrayed realistically in…,” he pauses, then rethinks, “Or not even portrayed in modern art.”

He was known to pay close attention to his predecessors, sometimes painting while books lay open to their paintings. Heads, one of his recurring motifs, looked to be influenced by, in equal parts, modernists’ taste for primitivism and his own generation’s preference for TV and comics. Schjeldahl noted in The New Yorker, “His witty painting of heads redolent at once of Picasso and of Africa might be seen to close a circle of appropriation that began when the Spaniard visited the Ethnographic Museum (now the Musée de l’Homme), in Paris, in 1907.”

Basquiat would have reveled in the line. “He loved being compared with older, dead artists,” says Mary Boone, who represented him in the mid-Eighties.

Fame and accomplishment were more important to Basquiat than money, in his art dealers’ view. “He was very independent-minded, excited, excitable,” Nosei says. “But I think [he felt] a certain uneasiness being successful in relation to other artists his age.” Like many who seek and find fame, Basquiat seemed to grow weary of it. In the 1986 documentary interview, he observes ambivalently, “You go to a restaurant, and they write about it in the Post, on Page Six, you know?”

Nosei stopped representing Basquiat in 1982. When his drug use intensified and she discovered he was receiving cocaine deliveries in the gallery basement, she turned him out. Even then, years after he had left home, after he’d found acclaim in the art world, his response to her was poignant: “He said, ‘Don’t tell my father.’”

Basquiat soon joined Mary Boone Gallery, a 1980s powerhouse that had helped make high-paid stars of Julian Schnabel, David Salle and Eric Fischl. Boone remembers a shy, sensitive young man. The perception of Basquiat as a “wild child in an expensive suit” is off base – though Boone does admit that he dropped $10,000 at Armani so that he would look sharp for his opening. “This guy was not stupid,” she says. “He knew exactly what he was doing. His paintings weren’t accidents.”

The first memory that comes to Boone, however, is a day in 1984 when one of her most prized artists announced his defection, and Basquiat comforted her. “Julian Schnabel had just left the gallery and I was crying in my office, and Jean-Michel comes in and puts his arm around me and says, ‘Mary, don’t cry,’” she says. “And he said something like, ‘I’m a much better artist than Julian.’” Then, in a gesture aimed to cheer her up while making fun of a cliché about blacks, he went out and bought her a watermelon.

Nearly 30 years later, Basquiat’s beguiling combination of boyish charm and utter cockiness still puts a smile on Boone’s face. She recounts his fondness for pink champagne and his habit of burying his telephone in the laundry basket; when she needed to speak to him, she’d send a hand-written note, “Please call me.” His untimely death still haunts her. In retrospect, Boone says she believes he may have been bipolar and, like others with that psychiatric disorder, turned to illegal drugs in an attempt to self-medicate. She also says she has come to view her own role in her artists’ lives differently: “Now I no longer think my responsibility is just to make money for my artists. If I see them going in a bad direction,  I say something.”

Perhaps the most stabilising figure in Basquiat’s life was Warhol, who Brant describes as “enamoured of his work.” As Phoebe Hoban writes in her 1998 biography, Basquiat: A Quick Killing in Art, the two began collaborating at the urging of the business-minded Swiss dealer Bruno Bischofberger, who became Basquiat’s most active dealer. Typically, Warhol would make one of his large-scale Pop paintings, and Basquiat would deface it, painting faces, scribbling or writing text on it. Who influenced whom more is a matter of some debate. Basquiat, who reportedly once tagged Warhol’s door, boasted that he convinced Warhol to paint again. In Boone’s view, the protégé did indeed have a greater impact on his elder. “Andy was always an artist who invited other people’s ideas,” she notes.

But Warhol was more than a creative mentor. He was a father figure. “He was the one person Jean-Michel would listen to,” Boone says. “Jean-Michel only went to rehab when Andy pushed it.”

“Andy was trying to help him get sober by working – that’s why they did the collaborations,” says Jane Holzer, a Warhol intimate, adding that Warhol figured if Basquiat were painting with him in the studio or even hanging out at dinner, he wouldn’t be doing drugs. “It was very loving.”

Basquiat reportedly took Warhol’s sudden death in 1987 very hard. “He complained he had nobody to talk to because nobody was intelligent enough,” Nosei says.

While some critics consider his “late” work – an imperfect word to describe art by a man still in his 20s – inferior to his early period, Boone disagrees. “They’re very empty and sad,” she says. “The paintings are very powerful.”

Basquiat overdosed on a cocktail of drugs in his Great Jones Street loft on August 12, 1988. Nosei believes he had prophesied his early death in the paintings Erotica and Erotica II, scrawling “man dies” on them. “He was totally aware of his coming death,” she insists. “He said goodbye to me – he gave me a photograph that said ‘To Annina with love.’”

[This article has been republished and originally appeared in 2013 in the magazine Sotheby's at Auction.] 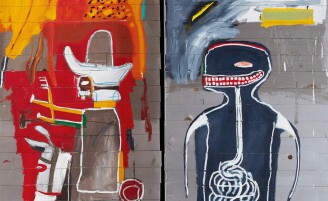