The Rarest of the Rare: Multimillion-Dollar Blue Diamonds

For every 10,000 gem-quality diamonds found, only one possesses brilliant and coveted color. Captivating and enigmatic, blue diamonds are considered the rarest of them all. A fabulous fluke of nature, a blue diamond is produced by the random presence of the atomic lattice-bound trace element boron within the stone’s carbon structure during its formation deep in the earth’s core.

The earliest known blue diamond came from the legendary Kollur mine in the Golconda, a region of India that produced such famous examples as the Idol’s Eye (15th century) and the Hope Diamond (17th century), perhaps the most fabled gemstone on the planet. Today, blue diamond discoveries of any size are still sporadic and always astonishing occurrences. Here are some exquisite blue diamonds offered at Sotheby's in the past:

The Farnese Blue – a 6.16-carat fancy dark grey-blue diamond which has subsequently passed down through four of the most important royal families in Europe: Spain, France, Italy and Austria – appeared on the market for the first time during May 2018. Having traveled around Europe for three centuries, the stone was hidden away in a royal jewelry box. Except for close relatives, and of course the family jewelers, no one knew about its existence.

In May 2017, Sotheby’s presented the ultimate in colored diamonds: Apollo and Artemis, since renamed to The Memory of Autumn Leaves and The Dream of Autumn Leaves, comprised of a blue diamond weighing 14.54 carats, internally flawless, type IIb, and a pink diamond weighing 16.00 carats, VVS2 clarity, type IIa. The stones were mounted as a spectacular pair of earrings, offered separately, on account of their extreme rarity, power and presence. Selling together for CHF57,118,750 ($57,425,478), they became the most valuable earrings ever sold at auction.

To celebrate the Millennium in 2000, De Beers, together with The Steinmetz Group, showcased an exceptional collection of eleven important blue diamonds, the De Beers Millennium Jewels, in a specially designed exhibit at London’s Millennium Dome. Offered for sale from an Asian private collection, this rare and internally flawless 10.10-carat blue diamond is the largest oval-shaped fancy vivid blue diamond ever to appear at auction and was the most expensive diamond ever sold in Hong Kong before the CTF Pink Star in April 2017.

The Blue Moon of Josephine

Smashing all records, the Blue Moon Diamond, renamed The Blue Moon of Josephine, sold in November 2015 at Sotheby’s Geneva for over $4 million per carat – the world auction price-per-carat record for a diamond or gemstone. “After seeing the stone’s colour and understanding its significance, it was fitting to name it the Blue Moon Diamond,” noted Suzette Gomes, CEO of Cora International. “Not only its shape is reminiscent of a full moon," she said of the cushion-shaped fancy vivid blue 12.03-carat diamond, “but the metaphor for the expression is exactly what one could say about the occurrence and existence of such a gemstone.”

In the November 2014 sale of the Collection of Mrs Paul Mellon, collectors eagerly vied for jewelry and objects of vertu that evoked her celebrated style. After 20 minutes of competitive bidding, Mrs Mellon’s magnificent and rare 9.75-carat fancy vivid blue diamond pendant sold for more than double its high estimate, driving the 98%-sold auction total to $218 million. It was renamed The Zoe Diamond. 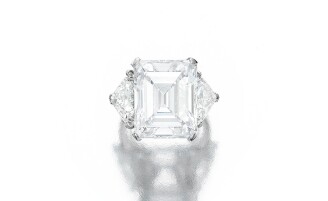 Discover
A World of Diamonds at Sotheby's