P hotographer François Halard is best known for his photographs of iconic architecture and interiors, particularly through his work for Vogue. He has documented the homes of such artistic giants as Cy Twombly and David Hockney, both friends of his. But his personal Polaroids tell a unique story, and give a greater insight into the vision of this compelling photographer.  From 8-15 December Halard's Polaroids will be on sale at Sotheby's selling exhibition: François Halard, Polaroïds Italiens. Art dealer and journalist Oscar Humphries tells us more about Halard's life, and how his interest in photography developed.

I have long admired the work of François Halard. It was a chance meeting through mutual friends that brought us together earlier this year, and it was soon after that we began exploring the idea of a book and an exhibition in London. Remarkably, ‘Polaroïds Italiens’ is the first presentation of his work in England.

Halard’s work has as much in common with painting as it does with photography. His images are personal impressions of the places they record – never literal or clinical, they are always nuanced. The particular atmospheres of his photographs, whether recording the Villa Malaparte in Capri or Cy Twombly’s studio outside Rome, have made him the most accomplished chronicler of interiors, architecture and gardens of our time.

The duality of his work is that it records beauty and makes beauty anew. For me, this makes his a unique and sentimental voice in the increasingly scientific realm of contemporary photography. Halard shoots on film, often using natural light, and the Polaroids presented here are studies – sketches if you will – of the finished photographs that have appeared in various books and magazines. Using Polaroid as a medium has an air of the antique, the digital having virtually eliminated it from the world of commercial photography. Shooting on Polaroid and film retains the artist’s hand in a way that an entirely mechanised process would make impossible. The works are all the richer for this approach.

Italy as seen by Halard is the subject of this book; his love affair with the country began when he was in his teens. The following Polaroids were made between the mid 1980s and today, and until a fortnight ago they formed part of the photographer’s personal archive in Arles.

‘When I was fifteen or sixteen I asked my parents if I could go to the fair in Milan to see Sottsass’s Memphis furniture’, says François, ‘it was a strange present to ask for; at the time I’d been reading my parents’ copies of Domus magazine.’ He grew up in Paris, the child of highly sophisticated antique dealers. Living from an early age with objects of beauty, they form part of his DNA, and it was perhaps inevitable that he would go on to work in the field of art. It was on this first trip to Italy that he took his first photos, with his father’s camera, of the Giardino Giusti near Verona.

‘I always wanted to be a photographer. My parents had a beautiful house and many people would come to photograph it.’ Whenever a photographer came to the house the young Halard would ask if he could assist them. ‘I would escape school and watch them working, it was fascinating. I remember Helmut Newton and Karen Rakay coming over, and every summer I would work as a photographer’s assistant, so from the beginning I had a technical background.’ In his work you can see these two gifts at play – one learnt and the other felt: a technical ability and something more of the heart than of the head.

Like his parents before him, François is a collector, and sometimes the line between his art and the art that he collects becomes indivisible, with each informing and enriching the other.

‘As a kid, I took my father’s camera and took pictures of the things in my room, but then I had no money with which to collect.’

With his first pay cheque he bought a lithograph from Cy Twombly’s ‘Roman Notes’ series from 1970. He also bought an eighteenth-century day bed, which lived at his parents’ house until, over fifteen years later, he was able to afford a house in which to put it.

The impression Twombly made on him was a lasting one, and when he eventually met his hero – at MoMA in the 1990s – he was able to realise a long-held dream. His photographs of Twombly’s studio are among his most celebrated. ‘I remember driving to the studio for the first time and being terribly excited; it was such an intense experience, I almost got killed getting there I drove so fast.’

Many of the values evident in Twombly’s work can also be found in Halard’s: a perfect amalgam of the modern and the classical, a powerful union of the then and the now. Halard bought his house in Arles because something about it reminded him of the way in which Twombly lived. The house is easily the most beautiful I’ve ever seen and overflows with objects that seem to hover in an indeterminate time zone, somewhere between ancient Rome, the eighteenth century and today. Of course, it is not unexpected to find our greatest living photographer of interiors residing in such a place of beauty, and perhaps it is a case of one thing feeding the other. The more we train our eyes, the more they give back.

‘When you surround yourself with beauty, it helps you go on. Beauty is medicine for the soul.’ 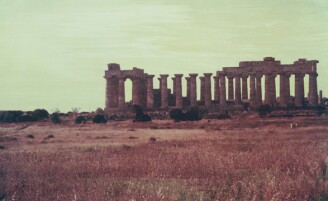