The Man Behind the Music: Photographer Claude Gassian

S tarting in the 1970s, Claude Gassian forged a reputation as one of the greatest portrait photographers of the music world. From James Brown to Mick Jagger, Bruce Springsteen to Patti Smith, Prince to Daft Punk, Gassian has covered the rock scene while remaining extremely discreet. As Gassian joins with Sotheby's to curate the Paris NOW! sale, which opens on 4 March, it is high time to put him in the spotlight and draw up a portrait – a Chinese Portrait - of the man behind the camera.

If you were a camera?

My father's Rolleiflex, through which ultimately everything happened. My father was a great lover of photography; he developed and printed his own negatives himself. He was the one who passed that passion on to me. The Brownie Starluxe II Kodak Brownie, all in Bakelite, which he gave me, also meant a lot. This is the camera that I took when I went to see Jacques Brel at the Olympia in 1966 and the Rolling Stones the following year. When I was young, I didn't really know what I wanted to do. I studied electronics, but music was my true passion. I was even a singer in a band. My first real photos were taken at the Isle of Wight Festival in 1970 with a 24x36 and a small telephoto lens. I went there with something that looked like a press card and I would say "French press" to get access whenever I was asked. I just bluffed my way in. At the time, I would buy the English music press every week. But I was always on the hunt for more images, so I decided to take them myself...

If you were a piece of music?

"Born to Run”, by Bruce Springsteen. Because I've spent my life running... Because I have also very often had to photograph artists under the pressure of time. I had to find a way to steal that moment of letting go – a moment of weariness – to make the artist more human, a little more anonymous. Fortunately, I was also able to establish long-term relationships. I followed two of the Rolling Stones’ European tours, in 1990 and 1995. A fantastic photographic and personal experience, each member of the band being particularly photogenic. There was also the inaccessible – Prince who hired me to follow his European tour in 1993 for a week. But this time the conditions were more complex. Even if, from one day to the next, I found myself alone with him in his limousine, I was forbidden to speak to him. It was for him to tell me what he wanted. I was very frustrated that I could only photograph him on stage most of the time. On the evening of his last after show, at 4 o'clock in the morning, in an old theater in Brussels, I broke the rule, asking if he would agree to come and let me take some pictures just ten meters from his dressing room, in this unlikely space that I had spotted. At first there was no response but a few instants later with a nod he indicates that he wants to follow me. He sits down in absolute silence, offers me fifteen different poses and leaves. I finally got the photo that I had longed for!

If you were a musical instrument?

The red Gibson guitar that Chuck Berry played when he invented rock & roll. I've photographed a lot of guitarists: Jimi Hendrix, Frank Zappa, John Lee Hooker, but in the end very few with their instrument, except when I was shooting them on stage. In reality, I always tried to focus on the moments that were out of the ordinary. I want my portraits to be, above all, scenes of real life. I like that one can wonder if the artist was just passing by, somewhat by chance, that above all he is not performing per say. It is also necessary to be able to take some distance from a face that is well known. Otherwise, it is the image of the artist that supersedes the photo itself.

If you were a star?

Bob Dylan. Then I could take a self-portrait and finally have my picture of Dylan! Even though I've often photographed him in concert, I was never able to get him to face me, eye to eye. This is one of my great regrets.

If you were a city?

New York, of course – for the music, for the art, for the light, for its energy and for it being so photogenic.

If you were a work of art?

A large sculpture by Richard Serra. I love to wander around the works of this American artist. It was at the Guggenheim Museum in Bilbao that I discovered his work. But it was the Dia Foundation in upstate New York that impressed me the most, with entire rooms devoted to Serra, Sol LeWitt, all these minimalist artists. It took me a long time to approach art. For the first decades of my life, I was only obsessed with rock and photography. It wasn't until the early 1990s that I became interested in art, starting naturally with the Mick Jagger series by Andy Warhol! Then one evolves...

If you were a quote?

Because that's something I can check every day. The number of things I didn't see around me before I became interested in art, during all those years I was running from one artist to another. It was my interest in other forms of art that made me want to make photos that were increasingly stripped-down. I like purity and geometry – respecting lines, framing in a very precise way, even in empty places.

If you were a face?

I don't have one. Or maybe I have too many. 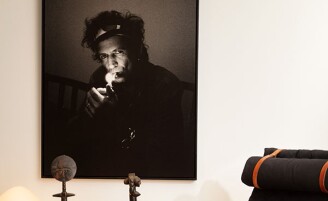