The James and Roslyn Marks Collection

Arcing from the artist’s nascent days at Black Mountain College in 1949 and touching upon almost every decade of production and exploration of unconventional materials and methods, James and Roslyn Marks assembled a collection of work by Robert Rauschenberg that is retrospective in scope and rich in art historical importance. Theirs is a collection forged first through friendship. The Marks’ Sanibel home was not far from Rauschenberg’s Captiva Island studio. Roslyn, known to friends as “Roz,” loved music as well as art; their mutual interests, proximity, and infectious personalities became the basis of a life-long relationship.

Beginning in the fall of 2016 and continuing through spring 2017, Sotheby’s is honored to present over a dozen works from the Marks Collection. Including examples from almost every period of Rauschenberg’s career – the collection reads almost like a survey of his inimitable and diversely multi-faceted artistic vernacular. The earliest work in the collection was completed in 1949, a fundamental year defined by his experience under the tutelage of Josef Albers at the Black Mountain College in North Carolina, and then in New York, amongst the freewheeling environment of the Arts Students League.

Two seminal examples in the collection from the early 1960s demonstrate the artist’s pioneering practice using solvent transfer, a rudimentary print process that anticipated the mass-produced language of Pop that was shortly to follow. In 1967, his technical audacity was evidenced again in his collaboration with Gemini G.E.L. of the largest hand-pulled print to date, Booster, a skeletal self-portrait of the artist himself. In the early 1970s, Rauschenberg incorporated used cardboard boxes into his work in the Egyptian series and experimented with printing on translucent fabrics in the Hoarfrosts. Influenced by Rauschenberg’s extensive international travels in the 1980s and 1990s, his works from this period engage a global perspective and transform these sights into personal visual poetry. They also employ a powerful new technique combining dye transfer with novel supports including large-scale paper and polylaminate panels.

The diversity of media pursued in the collection is a testament to the artist’s desire to challenge traditional notions of painting and break down the barriers separating different art forms. The materials represented in the Marks group include brass, aluminum, silk, polylaminate, wax, newsprint, tape, enamel, oil, acrylic, paper, steel and canvas. The images that appear in conjunction with and on these materials were culled from newspapers, magazines, and found posters, but mostly the artist’s camera. Rauschenberg blends together the realistic and the abstract, uniting otherwise disparate worlds and adding narrative to the space between life and art. It was Rauschenberg’s desire to have an audience of the world, to create a corpus of work that celebrated communication, freedom, and peace. As an inveterate inventor, his materials became the tools with which he could harness the power in images to create a window out. “There is no reason,” Rauschenberg has said, “not to consider the world one giant painting.” Offered concurrent with Rauschenberg’s first retrospective since his death in 2008 - opening at the Tate Modern in London in December and then traveling to the Museum of Modern Art, New York and finally the San Francisco Museum of Modern Art – the Marks Collection presents alongside as a capsule into the artist’s epic vision, technical ingenuity, and love for life, in all its beautiful and messy permutations. 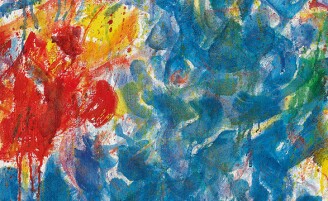