The History of the Iconic Van Cleef & Arpels Alhambra Collection

I n the first half of the 1950s, infamous French fine jewellery house, Van Cleef & Arpels recognised the need to create more accessible fine jewellery pieces for a new generation of women. It launched ‘La Boutique’ in Paris in 1954, and soon found a voracious appetite for semi-precious jewellery pieces that could be worn as daytime adornments, rather than alongside formal evening attire. Of all the jewellery motifs created by Van Cleef & Arpels in this era, perhaps the most widely acknowledged and emblematic of the house is the Alhambra, which was first unveiled in 1968.

The Alhambra is a talismanic design inspired by the four leaf clover and reminiscent of traditional Moorish quatrefoil (a framework pattern consisting of four overlapping circles). In fact, the collection is said to be named after the Alhambra Palace in Granada, Spain, which boasts a number of sweeping archways.

The first Alhambra design was an opera-length necklace punctuated with 20 clover-shaped motifs crafted with the design’s signature beaded edges. As the 1960s made way for the 1970s, the design became hugely popular among celebrity clients, who layered many Alhambra necklaces of different sizes and with different gemstone combinations for the quintessential daytime look. The American actress Grace Kelly, who later went on to become Princess Grace of Monaco, was a long-time devotee of Van Cleef & Arpels and a collector of Alhambra necklaces in coral, malachite, rock crystal, tortoise shell. She regularly wore two or three at any one time, with the addition of an Alhambra pendant to make the look her own.

During its 50-year history, the Van Cleef & Arpels Alhambra has been almost continually refreshed and revised, making it one of the house’s most collectable fine jewellery motifs. Each decade saw the introduction of new semi-precious and precious gemstones, such as carnelian, agate, onyx, tiger’s eye and turquoise, as well as feminine mother-of-pearl, diamonds and sky blue chalcedony, in special capsule collections each with their own spin on the Alhambra motif, such as Magic Alhambra, Sweet Alhambra, Pure Alhambra, Lucky Alhambra and Byzantine Alhambra, to name a few.

There’s also the Vintage Alhambra collection in bois d’amourette, also known as letterwood, which has a flecked reddish-brown appearance. To produce this facet of the Alhambra collection, Van Cleef & Arpels relied on the skills of a traditional cabinet maker and inlayer.

Thanks to the continued popularity and varied iterations of the Van Cleef & Arpels Alhambra collection (covering necklaces, rings, bracelets and even watches), the motif has become an instantly recognisable symbol of the brand and the message of good luck and good fortune at its heart.

Jewels Online presents an array of jewels from the 19th century to the present, including iconic jewels from the great houses of Cartier, Bulgari, Chaumet and, of course, Van Cleef & Arpels. The sale will take place from 24 June – 5 July 2019. Find out more and place bids here. 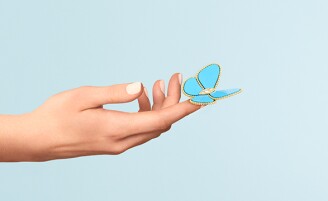