The Great Within: The Photographer’s Angle

My romance with 19th-century photographs of India began one hot summer in 1959 in a city then known as Calcutta. At a decrepit photographer’s shop near the New Market, where I stopped to have my film developed, I chanced upon a photograph of scenes of Calcutta, which I bought at the commercial photographic firm of Johnston and Hoffman. This began my lifelong passion for these indelible images.

During the 60-year period during which I have collected this work, trying to discover amid decades of searching both the makers of these photographs with their biographies, and their pictures, I discovered that this impossibly evanescent œuvre thrived for only 35 to 45 years.

Abandoned by the progress of technology, so scarce is this work, that today it only exists in exceedingly rare prints. The incredible heat and humidity of India along with the highly acidic papers of the album mounts used in early times have faded and destroyed 95 per cent of this work. Many of the pictures I collected were a century and half old. They needed help. Not only were they rare and fragile, but they were also disintegrating.

In 2001, I was invited to become the Founding Curator of Photography at the oldest museum in America. Founded in 1799, the Peabody Essex Museum had gathered together the most extensive collections of non-Western photographs held in the Western hemisphere. The problem, however, was that these works were not exhibitable. How then was one to present these rare, non-Western 19th-century photographs without further damaging the works? This led me to begin a series of experiments using the new technology of digitally made prints, which I also exhibited at the museum. My books, curatorial work and finally my own collecting interests led to the founding of a digital atelier.

To this day, not a single museum collects 19th-century non-Western pictures, and so I decided to create a limited edition series of prints in state-of-the-art carbon inks that honours this forgotten œuvre. It has since grown into a program using permanent carbon inks married to museum-grade etching papers that now create unique archival prints that survive centuries.

It was in India that the idea of “reimagining” prints of the non-Western world by 19th-century photographers first occurred. In 1864, Samuel Bourne’s prize Gold Medal photograph, awarded by the Bengal Photographic Society, was selected for an unusual printing that was to be given to the membership of the Society. Unfortunately, though, on 6 October 1864, much of Calcutta perished in a great hurricane that struck the city destroying everything in its wake. Bourne’s otherworldly Gold Medal picture was a casualty of this catastrophe. From his single extant exhibition print, a generation of Bourne & Shepherd photographers intermittently “reimagined” Bourne’s own copy, despite the fact that not a single original print of that image had survived.

Few photographers in the history of the medium have equaled Samuel Bourne’s magnificent Indian pictures that were created during his six-year stay in the country (1864–70). With the assistance of as many as 60 Indian hill men who were enlisted to carry both Bourne’s cameras and his developing equipment, his work done in the Himalaya is in itself a grueling epic that has never been equalled in photography. In the 19th century, there was never any doubt about the authenticity of Bourne’s negatives, printed then sold by later photographers of the Bourne & Shepherd firm.

During the same period, in other parts of the world, the reimagining of one photographer by another came to be a well-accepted convention: in Japan, photographers such as Baron von Stillfried, Kusakabe Kimbei and Adolfo Farsari printed negatives made by Felice (Felix) Beato in the mid-1860s. Similarly during the 1890s in Glasgow, Scotland, Annan & Co. reimagined photographs from the 1860s by Victorian photographer Julia Margaret Cameron.

Perhaps the most arresting and important reimagining of one photographer’s œuvre used by another took place in the period 1931–65. American photographer Berenice Abbott devoted more than three decades of her life to this work. Abbott’s decades-long project reimagined the work of Eugène Atget, the magnificent early 20th-century photographer of Paris.

Similarly, in the 1970s, Lee Friedlander took up the work of E.J. Bellocq. It was a collaboration that led to Friedlander’s important exhibition at the Museum of Modern Art titled Storyville Portraits, which has since inspired novels, poems, and films. Friedlander’s great purpose was to bring to notice the startling and completely forgotten work of Bellocq, which would have otherwise remained unknown.

It is my own belief that in no other discipline have there been such important interchanges between living photographers and their predecessors. It inspired me to find a collaborator familiar with the avant-garde world of emergent digital technologies so that together, we might be able to create permanent prints of extremely rare pictures that have been forgotten and overlooked in the history of the medium.

After a decade of searching, I found a brilliant photographer and a pioneer carbon digital printer named Jeff Gaydash. Together, Jeff and I set out on a journey into great rarity. We followed the footsteps of photographers a century and a half ago, who had reinterpreted the works of their predecessors.

It is now virtually impossible to collect 19th-century photographs of the non-Western world. These are places “disappeared.” So rare are many of the greatest 19th-century photographs of India that they still remain largely unseen. It is my hope that these reimagined images will kindle in others the same spark that was lit in me that hot summer day half a century ago. 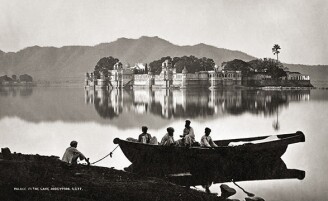