The Collector Who Unearths Forgotten Masters

Self-taught in art history and driven by his passion for the hunt, Christian Adrien and his wife Isabelle have in the past 50 years acquired a remarkable collection of Italian, French and Northern European Old Master Drawings. Their collection – Dessins de la Collection Christian et Isabelle Adrien – will go on sale at Sotheby's in Paris on 22 March.  Many of these drawings were acquired as anonymous works, but following dogged research were revealed to be by important masters such as Salviati, Carracci, Rubens, Poussin, Lemoyne and Nattier.

SOTHEBY'S: Do you consider yourself more a hunter of hidden treasures than a buyer of identified and classified drawings?

CHRISTIAN ADRIEN: Yes. I define myself as a second parent. My biggest joy is to rediscover drawings that have been forgotten by art history and identify them. Most of the drawings I have acquired throughout the regions of France were from flea markets, non-specialist antique dealers or private individuals and were unknown, misattributed or misidentified in terms of their geographical origin or period.

S: When and how did you discover your passion for drawings?

CA: My interest in art began with paintings, at the age of twelve or thirteen, thanks to a French teacher who, every Sunday afternoon, would take me by train from Versailles to the Grande Galerie of Le Louvre. I was stunned by the two Saint Sebastians, by Mantegna and Perugino, by the young women of Botticelli, and by Watteau’s fêtes galantes.

In those days, drawings were not shown to the public. There weren’t any exhibitions or publications. For a thousand francs, you could pick up major artworks like the Le Brun, Jupiter Seated in the Clouds, which I was lucky enough to acquire in 1976 from a dealer on the rue Mont-Thabor, just by the Concorde. This drawing had been in his window for six years, the name of Le Brun inscribed on the mount. I had seen it at that time, when buying my Lemoyne drawing from him, but it seems no-one else noticed it. I was able to confirm the attribution, thanks to the pendant, in the collection of the Louvre.

S: Apart from the difference in cost, why did you choose drawings over paintings? Why do they appeal to you more?

CA: With drawings, you are at the very beginning of the process of creation. It’s the creative minute, the first idea.  You also have physical proximity with the artwork, and an intimacy with the artist. You hold the drawing in your hands, just like the person who made it. And when you pass your fingers along the paper, you are repeating the gesture of the artist before you.

S: Throughout your career, art historians, experts, researchers, museum directors and curators have guided your steps, in particular the celebrated art historian Pierre Rosenberg, former Director of the Louvre. How did you meet them?

CA: At the beginning, Pierre Rosenberg wasn’t as well-known as he is today. I was thirty years old and he was thirty-two. I met him by chance through a colleague at L’Oréal who knew him well, and who one day told him, by accident, that her boss was a drawings collector. The next day, I was in his office in the Louvre. Intrigued by this newcomer to the field, he helped me — very generously — to get a foot in the door. He introduced me to all the art historians of the moment such as Jacques Thuillier, Bruno Foucart, Antoine Schnapper and many more.

S: What is the drawing you are the most proud of?

CA: It’s a drawing by Jean Restout. I was on holiday in Étretat, in 1991. I put my windsurfer back on the top of the car, sweating in my wetsuit, and went to say hello to the local antique dealer whom I visited every other day. On the floor was a framed drawing, face to the wall. I turned it around and then… what Pascal describes as a 'suspension d’inquiétude', that magical moment when you finally find what you were looking for, when time stands still. This anonymous drawing, a trois crayons study of the head of a man, was magnificent, the equal of the very best drawings in my collection. The label on the back of the frame said 900 francs. Nothing – the equivalent of around €150.

What a shock when the antique dealer explained to me that it was turned to the wall because he had sold it that very morning. I begged him to pass on to the new owner my offer to buy the drawing, but I had to wait a whole year to obtain his name and meet him. In the end, because of my “obstination sympathique”, he finally agreed to meet me, and I took the drawing home, in exchange for a cheque for 2,300 francs.  I raced back to Paris, having already alerted Rosenberg, who immediately identified it as a study by Restout, for his lost painting of Christ in the Garden of Olives – for which the Louvre has a full compositional study.

Ten years later, I was fortunate enough to stumble across this lost painting itself, in the window of a framers in the Avenue des Ternes.  I gave both the painting and the drawing to the Musée des beaux-arts de Rennes, in gratitude for their hosting of the exhibition of my drawings in 2012.

S: In addition to these two Restouts, the Musée des beaux-arts de Rennes would surely also have liked to receive other works from your collection. Have you thought of giving more away?

CA: The museum would have loved to obtain my entire collection but it represents much too important a part of my estate for me to be able to dream of donating it. The museum could certainly have bought a part of it, but it would probably have chosen the five best drawings, and that would have weakened the collection too much.

I chose a public auction at Sotheby’s thanks to the enthusiasm of Cristiana Romalli, senior specialist in the Drawings department, whom I have known for more than twenty years. It’s very painful to part with my collection, of course, but I also feel a new emotion, one that the Goncourt brothers never had, that of connecting and sharing.

S: Do you have any regrets? Or drawings that you still dream of acquiring?

CA: A marvelous portrait by Philippe de Champaigne, of Charlotte, his young wife. The most tender and chaste declaration of marital love ever set down in black chalk on paper. I was present at the auction, powerless and unable to spend such a sum, when it was sold for €30,000.  What pain to see it again, 17 years later, on a poster on a bus shelter in Port-Royal des Champs, loaned by the Metropolitan Museum to the exhibition there. 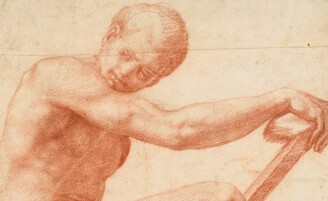