On 21 June, the Old Master and 19th century Paintings, Sculptures and Drawings sale in Paris includes a group of 30 paintings by late 19th century and early 20th century artists of the Lorraine region (North-East of France) from the collection of Jean-Louis Burtin, including a unique group of sixteen paintings and two drawings by the Naturalist painter Emile Friant.

Jean-Louis Burtin (1878–1946) was born in Nyons, Switzerland, and lived in Nancy from his childhood onwards. In 1914, he began building up a large collection. Himself a statuary sculptor, interior designer and stucco worker, he was fortunate to live at a time of intense artistic activity in Nancy and the Lorraine region, reflected in the rich variety of his collection.

This group, which is only a part of Burtin’s collection, has remained with his heirs until now. It illustrates the collector’s deep love for his region, who acquired the works of its painters and sculptors – mostly friends and colleagues, particularly Emile Friant, to whom he was very close.

Emile Friant (1863–1932) worked in Nancy as one of the masters of Naturalism: a movement that flourished in France and Europe between around 1880 and 1900. Friant wanted to reproduce nature as it was, avoiding all compromises and academic canons that hindered the free expression of his thought. He focused on contemporary life in the city and countryside, depicting labourers and humble folk for whom he clearly felt great sympathy.

Take a look at highlights from the collection:

La discussion politique, one of the collection’s most iconic works, shows a lively discussion between labourers on the banks of the Meurthe. Painted in 1889, it reflects the political agitation of the time, when General Boulanger, a French politician, was at the height of his popularity. The passionate feelings of the characters and the tension between them are illustrated to perfection in their faces and gestures. All the expressions, attitudes and movements are finely-judged, without exaggeration. This vibrantly truthful painting demonstrates the young Friant’s admirable talent for depicting people’s emotions and moods.

Le repas frugal, typical of the Naturalist movement, also evokes the working-class world of the Lorraine with a family about to take a “frugal meal” in their modest home. From this intimate interior with its tight composition emanates a feeling of serenity. Friant knew very well the family he depicted here: it is that of Eugénie Ledergerber, his lifelong companion.

His attachment to his region and friends in Nancy is always apparent in his work, as when he painted Les artistes Mathias Schif et Camille Martin assis dans la campagne, showing the artists lounging on a hillock not far from Nancy, around 1880. At this time, Friant was interested in the countryside and would paint outdoors, producing a series of urban and rural landscapes from life.

In Tendresse maternelle a less common theme in Friant’s work is developed: that of childhood. This charming scene with a mother and her little girl is painted with a vibrant, luminous touch clearly influenced by Impressionism. 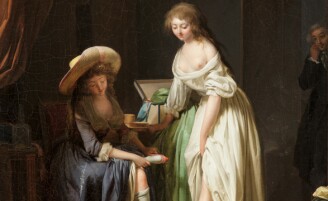