By Harrison Tenzer
In conversation with Gabriel Whaley – founder & CEO of MSCHF, the game-changing Brooklyn-based art provocateurs – to discuss their latest drops, inspiration, and the blurred lines between Fine Art, Fashion and Luxury


How did you conceive of MSCHF and how did you choose the name? What inspired you?

I never really started MSCHF with any particular intention beyond creating objects and interventions with a point of view, typically in ways that misused the initial intentions of the medium and format. I did this for years with a small group of friends and collaborators.

As the world started taking notice of the works we were putting out, it only made sense to formalize our work under a common banner. Since the shared sentiment among all our works is the feeling of “mischief,” it made sense to go with that name.

However, every permutation of url with “mischief” in it was already taken, so we just went with a version without the vowels so we could get a decent domain name (mschf.xyz).

I never really started MSCHF with any particular intention beyond creating objects and interventions with a point of view, typically in ways that misused the initial intentions of the medium and format.


Who is the MSCHF team? Has it changed over the years?

We are a team of approximately 15, with backgrounds in fine art, furniture design, music, murals, and even metalsmithing. Really just a bunch of outsiders who see the world similarly, and also like working together. 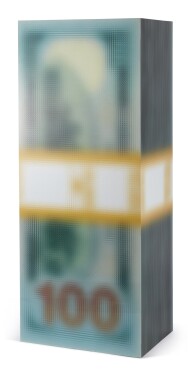 Tell me about the work that is coming to auction at Sotheby’s. I understand that it is influenced by a work from one of your recent drops. I keep thinking about Warhol's Dollar Sign works - the system of economic distribution as the subject of the work.

In late 2020, we released what I would call an ecommerce performance art piece called “Blur.” It lived on an ecommerce website (whatisblur.com) where the object for sale appeared to be blurred out, with the idea that you must purchase it to receive it in person and ‘reveal’ what it actually was.

Upon receipt, however, the buyer discovered that the object was exactly as advertised - a solid, brick of what appears to be a stack of $20 bills which has been blurred on all faces. What looked like a blurred photo was in fact an unblurred image of a blurry 3D object.

Blur was all about reading value into an object, and the tantalization of the unknown. That concept is equally applicable to a medium like sculpture. Purchasing an art object is almost always a trade of the brutally functional for the beautifully abstract: money for...something! What we did with blur was visualize this transaction – the blurred block made to look like an unknown object-in-potentia – and then subvert it by delivering exactly that representation of potential, still unresolved.

Big Blur is simply a larger than life version of this object.

Why did you and your team decide to sell this work at Sotheby’s?


Do you see a firm distinction between fine art, fashion and luxury goods? Should these markets be featured on separate specific sale platforms or together?

Maybe the largest distinction here is quantity: fine art objects tend to be more exclusive than the other two, in general. On the other hand, maybe it doesn’t matter at all when they’re for sale. Each respective community is better equipped to engage with its particular genre of work, but commerce flattens them. At the end of the day all three categories of object serve similar functions of identity construction, wealth storage, and social signification for their respective collector audiences. The point is, there are meaningful differences between art, fashion, and luxury goods – none of which are really important if what we’re specifically talking about is just the platform they’re sold on.

What are some of your favorite drops?

Jesus Shoes (jesus.shoes) – we took Nike Air Max 97s and filled the soles with holy water so you can walk on water like Jesus.

Severed Spots (severedspots.com) – we bought a Damien Hirst spot painting, cut out all the spots and sold them all individually at a markup.

MSCHF Mag (mschfmag.com) – we have a quarterly magazine that gives the public a deeper glimpse into how we see the world.

Birkinstocks (birkinstock.shoes) – we created a line of Birkenstock sandals out of chopped up Birkin Bag leather.

As we see the rise of NFTs in the art and fashion worlds, does MSCHF have plans to create digital art or is there’s something about maintaining a physical practice that is important to you?

MSCHF has never really made any distinction between physical and digital. Our work tends to blur the lines between both worlds, so in a way, nothing really changes with the rise of NFTs.

What’s next for you and MSCHF?

We release a new work every second and fourth Monday of the month, so there is always something new on the horizon. 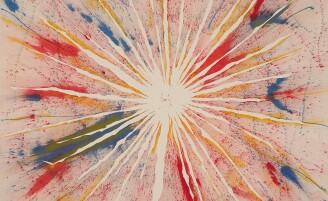