By Sotheby's
The six-year friendship between Andy Warhol and Jean-Michel Basquiat has fascinated the art world for decades. Sotheby’s S|2 Gallery’s upcoming exhibit revisits one of most legendary relationships in contemporary art history.

Warhol and Basquiat were an unlikely pair: two aesthetic pioneers from different generations, two iconic creative minds of an era, and two good friends. They would forge one of the most important relationships within the history of contemporary art. Warhol, founding father of Pop art, and his much younger Neo-Expressionist protegé Basquiat emerged from different generations and backgrounds. But within the span of six years and a deeply intimate albeit turbulent friendship, the mutual respect and admiration that Basquiat and Warhol shared for one another inspired two separately iconic bodies of work, which have become eternally emblazoned within the highest echelons of fine art.

The story begins in the early 1980s, when the teenage Basquiat frequented Warhol's New York City studio, The Factory, in an effort to infiltrate its social scene. At first, the Warhol regarded the ambitious Basquiat with aloofness. In late 1982, Swiss power-dealer Bruno Bischofberger set up a lunch between them, and Warhol started paying attention.

On 4 October 1982, through an off-hand entry in Andy Warhol’s diary we gain the first insight into the momentous union of the indisputable avant-garde legend and a then rising star of the New York art scene:

“Down to meet Bruno Bischofberger (cab $7.50). He brought Jean Michel Basquiat with him. He’s the kid who used the name 'Samo' when he used to sit on the sidewalk in Greenwich Village and paint T-shirts…he was just one of those kids who drove me crazy…he’s black but some people say he’s Puerto Rican so I don’t know…And so had lunch for them and then I took a Polaroid and he went home and within two hours a painting was back, still wet, of him and me together.”

Emerging as a revolutionary figure in the 1960s, Warhol had been at the heart of the art establishment for over twenty years by the time he met Basquiat. The two artists were at different stages in their lives and careers by this point. It seemed that during ’70s “Warholism had superseded Warhol,” in the words of legendary critic and art historian Robert Pincus-Witten. Warhol became aware of critical admonishment for a decade dominated by the portrait commissions and was extremely concerned about his public reception at the dawn of the 1980s. According to Pincus-Witten, artist was desperate to inaugurate “the Return of Andy Warhol.”

When the two were first introduced to one another in 1982, Basquiat was a young graffiti street artist who had only just gained legitimacy and recognition. In their friendship, each found in the other something that he himself lacked, and each was enamored and intrigued by the other. Basquiat sought the fame, recognition, and access. Warhol desperately desired a shock of innovation and renewed energy in his work. Basquiat and his fresh perspective offered the essential injection of life that Warhol was looking for to revive his career. On the other hand, the well-connected Warhol offered Basquiat the notoriety and network to establish his critical reputation.

The symbiotic relationship was not just borne of professional ambition. According to the those who knew the two artists back in the ’80s, Warhol took an almost parental role in Basquiat’s life. Warhol and Basquiat had a remarkably close friendship lifted by a genuine mutual adoration and inspiration.

The late 1980s would later become some of the most productive of Warhol’s career, resulting in some of his greatest works. Keith Haring in his 1988 essay ‘Painting The Third Mind’ wrote of the pair: “Jean brought back a much-needed touch of mischief that had been disappearing from the Factory agenda. But, he also brought an atmosphere of obsessive production that left its mark long after the collaborations had stopped."

“For an artist, the most important and delicate relationship he can have with another artist is one in which he is constantly challenged and intimidated," Haring wrote. "This is probably the only productive quality of jealousy. The greatest pleasure is to be provoked to the point of inspiration.”

“It was a physical conversation happening in paint instead of words.”

During one of his visits to the studios of Warhol and Basquiat, Haring observed: “Each one inspired the other to out-do the next. The collaborations were seemingly effortless. It was a physical conversation happening in paint instead of words. The sense of humor, the snide remarks, the profound realizations, the simple chit-chat all happened with paint and brushes.”

Basquiat and Warhol have come to embody a profoundly symbiotic and mutually beneficial creative relationship. Seeing their works side by side, the viewer encounters a playful selection of quotidian symbols whose mutual juxtaposition spark riveting semantic games. The friendship monumentalizes a fleeting moment when two of the most revolutionary artistic minds of the 20th century found a fruitful common ground. 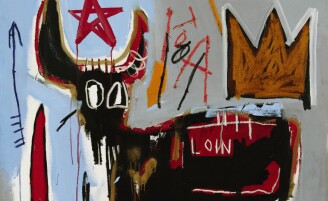