In contemporary art, cut-out paper silhouettes have become a potent medium for social commentary, as illustrated by two lots in Sotheby's Contemporary Art Day and Contemporary Art Evening auctions this June. These are works that speak of racial injustice.

During the 18th and 19th centuries silhouettists produced cheap miniature portraits for the twee bourgeoisie. The name itself is a reference to frugality – Étienne de Silhouette was a French finance minister who triggered austerity measures: silhouettists have long produced cut-rate entertainment for the masses.

In the foreground of Kara Walker’s Untitled (1996) is a brutal silhouette of a girl bludgeoning a horse in a spiral of violence. The counterpoint to this figurative struggle is a pastel study of a steamboat on fire, an oblique reference to the sinking of the Sultana on the Mississippi in 1865. While this was the worst maritime disaster in American history (some 1,192 people perished) the tragedy was overshadowed by the assassination of John Wilkes, Abraham Lincoln’s murderer, the day before.

In the telling of one history, Walker shows, we are prone to overshadow others. Cut-out silhouettes offer her a secretive and intuitive artistic release. “There is a stream of consciousness thing that happens when I do the cut paper pieces,” Walker observed in 2015.

Another instinctive artist is William Kentridge, the white South African who flits between mediums – he has embraced drawing, printmaking, animation, film, murals and sculpture. In the early 2000s, he brought silhouettes into his work in a series of tapestries and a number of paper collage pieces, such as Collage on Leviathan Pages (Commonwealth).

In this work, Kentridge’s silhouetted characters are sometimes indistinct but all deliver a sense of unease – figures bowed, bent and on their knees, gnarly amorphous trees, people struggling with one another. Like Walker, Kentridge is focused on race relations, in particular his country’s shameful history of apartheid and the social powder keg of his home town of Johannesburg. For the backdrop to his cut-outs, he uses pages from Thomas Hobbes’ Leviathan, a 17th century discourse on social conflict.

These two works highlight how shadow-play can illuminate black and white issues. At a talk Walker gave in 2000, a white man asked her how long she would continue in her current artistic mode. “Oh, probably as long as I’m black and a woman,” Walker replied.

Both works appear in the New Wave/New Beat Collection, a group of works across the Contemporary Day and Contemporary Evening Auctions. The works in this collection largely speak to a prevalent political dialogue. Other works to confront racial stereotpyes and issues include pieces by Ellen Gallagher, Henry Taylor and Jean-Michel Basquiat. 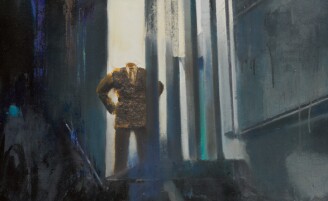