Sotheby's
As part of our series of interviews on The Supreme Vault: 1998-2018 online-only sale, we talk to DJ and writer Ross Wilson on how the brand has impacted his life.

What does the brand Supreme mean to you?
To me, Supreme is skateboarding, New York, friends, good times, and great memories. It sums up what was a really exciting time - both in my life and in New York City.

From your perspective, what makes Supreme so collectable?
The simplicity of the brand’s logo means it works really effectively on a multitude of different products, so once you have a few things together I guess you want more of the same.

What was your first major Supreme memory?
Just hanging out at the original store on Lafayette Street in the old days. Between ’94-’04 it was just a spot where I’d hang out to watch skate videos and catch up with friends. Then, when the store closed, everyone would take off to go skate in downtown Manhattan and end up in the bars around the Lower East Side. It was definitely more about a social scene than shopping back then.

To me, these are classic examples of how Supreme can take ordinary items and make them its own, simply by draping them in its signature red color and adding careful logo placement.

What is your all-time favorite Supreme piece?
I’d say it’s either the original shop tee (red Box Logo on white t-shirt) or some of the early skate decks. Some of the aforementioned accessories come pretty close though.

Why do you think Supreme has such high resale value?
I guess the fact it would release new things and that would be it – Supreme would rarely come back around again with exactly the same product or design so the older pieces are now highly desirable compared to when they were first released. The fact that, for a while, you’d have to visit the small Supreme store in NYC in order to access the products made it a highly collectable brand.

People go crazy for Supreme accessories - what makes them so appealing?
If you like Supreme’s aesthetic and attitude, but don’t really like the clothing, then I guess it’s an easy way to buy into the brand. It tends to work on iconic items that have large scale appeal and happen to look good in red!

If you could only have one Supreme accessory, which would it be?
Back in 1999, Supreme owner James Jebbia had several bespoke BMX cruisers specially made by Brooklyn Machine Works. These bikes were gifts for the Supreme store managers and never sold to the public. Brooklyn Machine Works used to make incredible bikes that were all hand built in the US, and the Supreme version remains a straight-up classic. 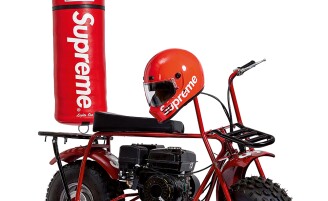