Sturtevant: On Repetition and Différence

The question posed by Sturtevant’s highly unusual yet fascinating oeuvre is – even today, over half a century after her first Warhol Flowers in 1965 – why?

The appropriationists were really about the loss of originality. And I was about the power of thought.

A close friend of Jasper Johns and Robert Rauschenberg, Elaine Sturtevant (known as Sturtevant, to avoid gendered assumptions) made her name by meticulously replicating some of the most iconic works of her generation – Johns’ flags, Beuys’ chairs, Lichtenstein’s comic art and Warhol’s Marilyns, as in the work on offer at the Hong Kong Contemporary Art Evening Auction this Spring.

Through such a mode of creation, Sturtevant challenged the very logic of Pop art, exploring notions of originality and authorship. She has been called the mother of appropriation art – a movement that flourished only later in the 1980s.

Sturtevant disliked the term, however. “The appropriationists were really about the loss of originality,” she explained. “And I was about the power of thought.”

The New York Times observed in 2014: “As a replicator, Ms. Sturtevant was an original. A Sturtevant work is as instantly and uncannily recognizable as a Warhol silk-screen, say, or a Johns flag. But, at the same time, each in its own way is a deliberately inexact likeness of its more famous progenitor.”

Sturtevant was said to have read Gilles Deleuze’s seminal 1968 text, Différence et repetition, in its original French, with the aid of a dictionary, before it became available in English. At once same and yet different, her work compels viewers to look beyond the surface into what she termed the “under-structure of art”.

Beneath the ‘copy’ is a rigorous study on the action of art itself – not only its making but its circulation, its canonization, and its value. Sturtevant said: “I make reproductions in order to confront, in order to trigger thinking” (the artist cited in Bernard Blistene, ‘Lavel Elaine’, in exh. cat. Frankfurt, Museum für Moderne Kunst, Sturtevant - The Brutal Truth, 2004, p. 36).

The importance of Sturtevant’s pioneering oeuvre was overlooked for decades. In 2011, she was rightfully awarded the Golden Lion for lifetime achievement at the 54th Venice Biennale in 2011.

Another triumph – one arguably more significant – surfaced in the same year, when her reworking of Lichtenstein’s Crying Girl (1963) sold for USD 710,500 at auction. The ‘original’ lithograph by Lichtenstein sold for only USD 78,400 in 2007.

Peter Eleey, curator of Sturtevant’s major retrospective at the MoMA in 2014, the year of the artist’s death, declared: “She was the first postmodern artist – before the fact – and also the last.” 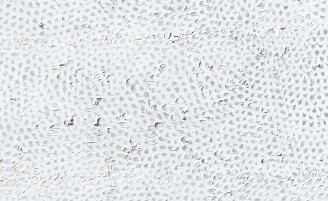