Stories of a Rediscovery: Durgouc's Imagination in the Service of King Charles IV of Spain

T his astonishing pair of triangular jardinières, or orange tree boxes, demonstrates perfection in its proportions, artwork and craftsmanship. Offered in the upcoming Rediscovered: Important 18th Century Furniture sale, the architectural form and decor of the pieces are perfectly balanced thanks to the choice of materials: the white marble square central panel, in a Turquin blue marble frame, on which exquisite gilded bronze ornaments are applied.

The abundance of ornamentation is incredible: braided leaves, lion cubs, griffons, musicians and nymphs are beautifully arranged. This is characteristic of Dugourc’s work and inspired the “Empire” style.

The designer and architect Jean-Démosthène Dugourc is undeniably linked with these magnificent pieces which are characterized by the Arabesque and Etruscan styles, popularised by Dugourc and prized by the Spanish House of Bourbon.

From 1786 onwards, he worked on projects for the Spanish Court, especially for El Pardo in Madrid, for which he designed a French cabinet whose floor drawings evoke the same geometric composition to that of the jardinières – showing four triangles, one at each angle, allowing one to imagine how the drawings would correspond to the designated location of the pieces.

The motif of the bacchantes, or nymph, within a rhombus is found on a drawing by Dugourc, illustrating a sofa made in 1788 for the Prince of Asturias, the future Charles IV of Spain and now at the Museum of Decorative Arts in Lyon.

Between 1786 and 1800, Dugourc’s involvement with the Spanish Court was so great that he eventually moved to Madrid in April 1880. His prospects improved and he became chief architect to the King of Spain, making him well suited to supply a suite of four jardinières delivered to the Spanish Court in 1802. His name does not appear on the invoice, but this was most likely due to his preference for avoiding paying any commission.

Jose Luis Sancho and Javier Jordan de Urries, curators of the Spanish Royal Collections, have graciously provided us with details which prove that the four jardinières entered the Spanish Royal Collection in 1802, purchased by King Charles IV. A pair remain in El Pardo however we do not know the date or the reason that our pair left the collection.

The present pair reappears in the Marquis de Baron’s infamous collection sold in Paris in 1914, and then in the Duke of Talleyrand’s collection before joining an important Californian collection at the end of the 1980s. Seeing them reappear on the art market 30 years later, and with a proven royal provenance, is a rare and special event. 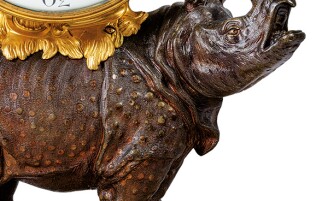