Sex and Subversion in the House of the Sleeping Beauties

I n Kawabata's novella, House of the Sleeping Beauties, the main protagonist, Old Eguchi, entering the later stage of life, is surrounded by memories and regrets. He is encouraged by a friend to visit a special ‘house’. This house, run by an indifferent madam, seems to guide men in the winter of their life through to a new phase, a stage of accepting and transitioning into death.

Through the experience of sleeping alongside sedated young women, each visitor to the house becomes confronted by the stark contrast of youth and old-age, beauty and approaching death. Through these transformative visits, memories and emotions which have long been buried or seemingly forgotten are forced to the surface. Through his signature economical use of language, Kawabata provides just what is needed to create a world of suggestion and ambiguity, allowing the reader only just enough to insinuate the recesses of Eguchi’s mind. As the story develops, layers and layers of his physiological state are revealed. These hidden aspects of the mind—desire, aggression, fear, hope—are what make Kawabata’s character universal in many ways. There is no ultimate conclusion in the novella, only suggestion of eventuality.

A purposeful looseness is what ties this novella to the current exhibition at S│2 London. Many of the artists in the exhibition defy classification and are not able to be placed within one school of thought or artistic sphere, and this is also what ties them together. Francis Picabia, Joseph Cornell and Marcel Duchamp will be exhibited alongside artists of the sixties and seventies such as Renate Bertlmann, Ulay, Natalia LL, as well as Keith Vaughan, Wally Hedrick, John Tweddle, and Kurt Seligmann who have remained on the edges of mainstream art.

Andrew Sherwood has documented various countercultural scenes with intimate detail. During the 1960s, he was based in New York and worked with Andy Warhol. During this time, he did a series of portraits of Warhol Superstar Jackie Curtis and of George Harris III (aka Hibiscus) who was part of the San Francisco- based queer performance group The Cockettes. Embracing drag and other experimental practices, The Cockettes staged now legendary midnight musicals at the Palace Theatre, performing jubilant, inclusive and rebellious extravaganzas.

A prevailing characteristic of his work is the way in which such eroticism flirts with a certain delicacy, as flowers and still life imagery feature as key constituents of his aesthetic. German artist ULAY works in a radical methodology, operating at the intersection of photography and the conceptually-oriented approaches of Performance and Body art. In White Mask, he performs for the camera, applying white make up to his face, and through a series of images, depicts the stages of transformation.

Friedl Kubelka has had many monikers: from 1965 to 1969, she studied photography, and began film-making, at the Graphic Instruction and Research Institute in Vienna as Friedl Bondy. In 1978, she married Peter Kubelka, an Austrian filmmaker and theoretician, and changed her name to Friedl Kubelka. She is also known for her architectural photography, fashion photography and friendship with Franz West as his unofficial photographer. In this exhibition, Kubelka’s Pin Up series from the 1970s are presented.

Each visitor is invited to enter multiple reveries, discovering both the familiar and the unknown: House of the Sleeping Beauties features works from twenty-eight artists in a range of media, including paintings, sculptures, drawings, photography and prints. The works are linked by a thread of suggestive eroticism and memory, bound within an all-encompassing dreamlike haze. Each work is immersed in a dusky-blue gallery, teasingly obscured by midnight blue translucent curtain partitions, so that what might ordinarily be tangible is just beyond full comprehension – like remembering a dream. 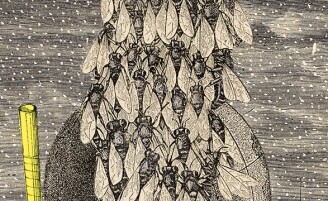