R udyard Kipling’s The Jungle Book illustrated by Paul Jouve is considered one of the masterpieces of Art Deco books.

After the first printing of the book in 1894 and 1895, Paul Jouve began the illustrations of these stories in 1913 but because of the war, the book was not published until 1919. The distinctive style of the animal painter lent itself particularly well to Kipling's imagination: his representations of Mowgli, Mowgli’s friends Bagheera and Baloo, Kaa and the fearsome Shere Khan have left an indelible mark on all those who know the book.

Only 125 copies of the book were published, all of them reserved for the members of the French literary group that had commissioned its publication. The work, in two volumes, is illustrated with 130 illustrations by Paul Jouve, 17 of which are without text, in colour, some highlighted in gold and silver.

This particular copy is exceptional due to its unique ornamentation and elements unfound in other copies.

An impressive silver plate by Jouve, representing Bagheera, graces the blue morocco binding of Marius Michel for the first volume. Only seven copies of this plate were cast: two in gold, three in silver and two in bronze.

The second volume contains an additional suite of illustrations, one of only fifteen to have been printed, numbered and signed by the engraver, Schmied.

To adorn the binding of this second volume, Jean Dunand created a magnificent lacquer painting also depicting Bagheera, emerging from the tall grass of the savannah.

Jouve and Dunand, along with Schmied and Goulden, came together in what has been called the Dunand-Goulden-Jouve-Schmied Group, with a first exhibition occurring shortly after the publication of this book, in the Georges Petit gallery in Paris in 1921. Schmied, who executed the wood-cuts for the book's illustrations, who had also directed the publication, was the one who encouraged Paul Jouve and Jean Dunand to ornament these two bindings.

This copy also includes two original gouaches by Jouve: one shows Kaa and the other is of a beautiful twilight landscape, which is not reproduced in the book.

These original drawings, this additional suite of illustrations, these two bindings decorated by two great artists of the 20s, make this an exceptional piece of Art Deco design. 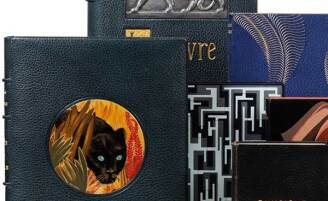