I n 1962, Pop Art astonished the world with five one man shows by Indiana, Lichtenstein, Rosenquist, Warhol and Wesselmann. Today, Pop is recognized as a major force in 20th century art. The original five pop painters are now “musts” for all serious contemporary collectors.

Why is Pop Art so important? In a word, because no other art movement has, with such perfection and beauty, portrayed modern living.

The original five pop painters are all stylistically unique and draw upon the gaudy pageant of American popular culture. They glorify the commonplace and every day consumer object, such as supermarket wares, billboards, household fixtures, Hollywood stars, comic strips, the American dream girl both nude and clothed, highway signs, advertisements for mass magazines and television, electric signs, etc. All this imagery done with fantastic design and colors ranging from sunny pastels to sizzling rainbow and neon.

Unlike the other Pop artists, Indiana explores vital spiritual concerns. Through words, signs, and numbers, Indiana introduced expressionism into Pop. It was his unique and haunting genius to take a single word and transform it into a hypnotic signal that could become anxious, meditative, instructive. His earliest word signals in 1962 such as “hug”, “eat”, “die”, “tilt” were to blossom in 1966 into the most known Pop icon, LOVE. “Love” as both a noun and a verb as in “love thy neighbor.” Indiana invented “love” and related messages, such as YIELD BROTHER that gave a shout, a backbone, and human meaning that unified pop art. For Pop is all about love in its many forms. For example, loving life and the commonplace in all its infinite ways. Once Indiana invented LOVE, it became a commentary about Pop’s essence. This is why no icon emerged from Pop is more famous than LOVE, not even Warhol’s Marilyn Monroe. If the other Pop artists celebrated the parade and the brash pageant that is modern life, Indiana alone gave the great eternal messages and verities that provided a structure for them.

It cannot be overemphasized that the LOVE, in its famous logo form, was not created until 1966 when Indiana was already famous and a Pop chieftain. LOVE completes the artist’s earliest thinking about human destiny and gathers into one succinct plea Indiana’s expressionism. The germs for this concept no doubt began with the key early painting THE AMERICAN DREAM, 1961, and the other word paintings in 1962, HUG, TILT, EAT, DIE, EAT-DIE, and the YIELD BROTHER, 1962, done for the Bertrand Russell Peace Foundation, with the purpose to help prevent atomic war. The earliest specific ancestor for the “love” is the 1962 HUG. The word “hug,” like the word “home”, is an American word that is impossible to translate to French – the closest French equivalent would be “serre moi chaleureusement dans tes bras.” Like “love”, it is a noun as well as a verb. Like “love”, a “hug” is cherished by all humans.

Then by 1966, Indiana realized that the solution and meaning to all his paintings could be threaded together by the “love” concept. For example, in the YIELD BROTHER, the world will be destroyed unless humans practice love. THE AMERICAN DREAM, the EAT, the DIE, are futile exercises without a hug or without love. It should be noted that along with his exhortative statements in 1962, Indiana began the “numbers” which, though too often overlooked, are crucial to understanding his total vision. These numbers symbolize the eternal, immutable truths that lie behind all human, emotional reality. They remind us that there are eternal truths remaining after the brazen ephemera celebrated by Pop. The numbers remind us that beyond the glowing skin and materialism in Pop waits Eternity. Perhaps that is why for the “numbers” the artist so often used the most electric colors – the same reds, blues and greens he would later on use for a great 1966 LOVE.

In 1962, Indiana founded an incredible idea to emphasize the injustice and pain in the world – TILT. In this painting the periphery of a circle inventories numbers 1 through 8. This symbolizes eternity. But at the center of the circle is TILT. The artist hereby tells us that something is wrong with life. Again, as with “hug”, no French word has quite the equivalent power in connotation as the English. Its richest connotation comes from pinball games where “tilt” means “you have cheated”. The TILT with its austere message relates to the great Indiana EAT-DIE painting, the first thing viewers saw as they entered the Pop retrospective at the Whitney Museum. This great painting summarizes Ecclesiastes – all its vanity, a human eats and then dies, and that’s it. This writer believes with the Whitney Museum that Indiana’s work is a good introduction to Pop because it shows that Pop, all appearances to the contrary, has a serious side to it, that it represents in life the good as well as the evil, the hope as well as the despair. And that if there is any hope or solution it comes from love.

However more important than Indiana as the apologist for Pop Art is the fact that he is a very great painter. He is as painterly as any Pop artist. His paintings are gorgeous. No Pop artist surpasses him as a colorist. No one could do electric colors that shake the eyes so well as Indiana. In his “numbers” and some “loves” the blues, greens, oranges and reds sizzle, shimmer, churn, vibrate and explode the retina. Also, as far as the modern obsession with flatness, no one surpasses Indiana. His remarkable visual flatness does not just derive like Johns from the fact that his subjects are all flat, but also unlike Johns are due to his “hard-edge” painting. In this sense Indiana is unique rethinking for synthetic cubism, Mondrian and Ellsworth Kelly. An Indiana painting is a magic signal that is flat, beautiful, meaningful, hallucinatory and exhortative. In closing it must be added that though Indiana ranks with any Pop artist in recycling ordinary subjects, he reigns supreme in his touching humanism, in his fire for reaching for his fellow humans, in his concern for fate and destiny – love (both giving and receiving), and hug (both giving and receiving), what human doesn’t desire them in order to give meaning to our absurd existence? What human should be allowed to forget Ecclesiastes – all humans, the 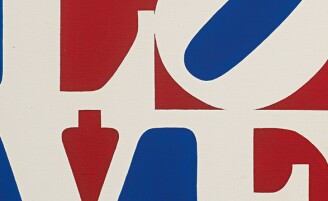