Returning To The Source – The Art Of Chiang Yomei

C hiang Yomei’s art takes one on an enchanted journey. Captivated by its immediate impact, you are almost unwittingly drawn into her work. As you explore further and immerse yourself more deeply, entire universes unfold. The experience transports one beyond the visual and physical towards the transcendental.

There are two kinds of artists. A great majority direct their energies outwards, shaping their works with an audience in mind. Other artists create from the core, out of an inner necessity. Fully aware of the impermanent nature of the material world, they are guided by an internal dialogue and the persistent pursuit of a greater truth. Chiang Yomei is such an artist.

Chiang Yomei’s art is a visual diary of an internal journey. Her working process is an extension of her spiritual practice, a way of combing through layers of memories and emotions in order to achieve clarity. Quietly and patiently she works on herself, distilling her art, ever mindful of remaining true to her core.

Chiang Yomei’s most recent works have reached a new apogee. An increasingly refined understanding and handling of her chosen media has enhanced her ability to create a sense of the sublime which is nonetheless grounded. Chiang Yomei has been a practicing Buddhist for many years. Her work is all about process. She uses the nature of material in its purest form by continuously building and breaking it down. Each mark made and erased thus becomes a memory of itself, no longer simply matter but something imbued with intention and energy. In the “seed syllable” series and “Nigredo”, “Albedo”, “Rubedo” series, Chiang Yomei uses sand mixed with adhesive as ink, inscribing the Sanskrit syllable ‘AH’ onto the surface repetitively, in many layers and from different directions, continuously erasing and overwriting, finally dismantling its original form. The process is not dissimilar to chanting until the chant itself is no longer recognisable, abstracted into a mass of pure pulsating energy. ‘AH’ may no longer be distinguishable, but the memory and the intention behind the act remains, distilled in the painting. The painting becomes a talisman. In these works she has reduced colour to a point of solemnity, as if renouncing it as an unnecessary distraction. The result is an increased temperature and intensity.

Chiang Yomei says: “Every single thing is moving inexorably closer to its ultimate dissolution. I am interested in the point of tension between absence and presence, resolution and dissolution, in the elusive space between ostensible polarities. In reality there is neither absence nor presence as all conditions are impermanent and in perpetual flux. From the cellular level to the cosmic, nothing remains static; everything is constantly changing, becoming something other. Fundamentally, boundaries and identities are just illusions.”  In her work Chiang Yomei expresses this transient nature with a light yet firm touch; you sense that her understanding of impermanence is deeply experiential rather than merely theoretical.

In this exhibition Other Realms, Chiang Yomei has presented us with an extraordinary installation, “Crossing”.  Hundreds of white paper slippers are suspended in the air, sweeping across the gallery space like a ‘sky river’. There are slippers for men, women and children, all hand-made with hand-made Chinese Xuan paper. The insole of each slipper is inscribed with the Sanskrit seed syllable ‘AH’, a symbol for transcendence and the breaking through of barriers. ‘AH’ is a primal sound that guides all sentient beings towards the ultimate realization of emptiness and liberation. She explained: “I wanted to use paper shoes because of their fragility, to reflect the impermanent nature of life.” The subtle play of light and shadow further enhances a sense of the ephemeral. The impact this work had on me was powerful and immediate, unleashing a tsunami of emotions. Using the most fragile of materials, Chiang Yomei manages to convey transcendence and unbearable sorrow at the same time. Remembrance carries a weight that cannot be measured; it is a private matter, unique to each individual. Although life and death are collective experiences, we all deal with attachment and loss individually. ‘Crossing’ captures an in-between space, between holding on and letting go, with the promise of liberation.

Memories and footsteps leave imprints, their traces fading with time. The airborne slippers in ‘Crossing’ remind us of the impermanence of all things. A nomad at heart, Chiang Yomei understands impermanence. Embracing and letting go are two sides of the same coin. Her work is an exploration into the most fundamental nature of things. The journey always takes us back to the very beginning; the path is itself the goal. 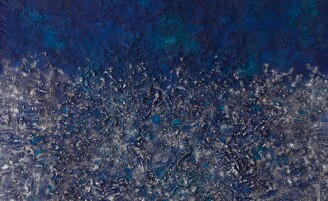