Rembrandt Bugatti's Portrait of A Panther

R ainer Maria Rilke composed his poem, The Panther, for the sculptor Auguste Rodin in 1907. Three years earlier, Rembrandt Bugatti had created Panthère marchant patte arrière levée (1904) of which the Hébrard foundry produced over fifty copies. It was a theme to which Bugatti would return to again and again, as these animals became a great source of inspiration to him, as they would become to Rilke.

His years spent patiently observing animals at the Menagerie of the Jardin des Plantes, and these majestic predators had partially allowed the sculptor to 'tame' them. His look and smell became more familiar to the animals every day, overcoming their original mistrust and forming a close bond.

Her vision from the constantly passing bars
has grown so weary that it cannot hold
anything else. It seems to her there are
a thousand bars; behind the bars, no world.

As she paces in cramped circles, over and over
the movement of her powerful soft strides
is like a ritual dance around a centre
in which a mighty will stands paralysed.

Only at times, the curtain of the pupils
lifts, quietly. An image enters in,
rushes down through the tensed, arrested muscles,
plunges into the heart and is gone.

This direct contact is the secret of his work. His attentive study deciphers their behaviour, their attitude and, like a spell, he succeeded in making us forget the bars of their enclosures. "His sculpture proceeds entirely from this daily contact, this exchange, this dialogue, this sharing, this communion, this fusion with animals". Then, like the poet, he humanises this panther who becomes "a companion of existence and work".

Bugatti achieved a real feat in producing this relatively small bronze in which no detail is overlooked. The animated surface of the fur, almost sketched, appears impressionistic in tone. The viewer can see from every angle a perfect understanding of the feline: the slight inclination of his head, the swing of his pelvis, his powerful legs and the voluntary dynamism that suggests the graceful movement of his tail and his right hind leg slightly raised.

Bugatti gives life to a condensed power. The bronze hides nothing: capturing the essence and character. Out of all temporality, like Rilke in his poem, Bugatti manages to evoke everything: brute force, willpower, silence, and above all an incredible modernity. 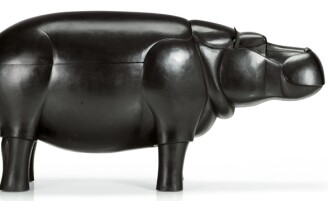