By Sotheby's
As an exhibition charting the popularity of luxury objects in 18th Century Paris opens at the Cognacq Jay Museum, we take a closer look at a pair of important Magots from the same period that will be offered for sale in the upcoming Excellence sale in Paris on 13 November.

T he creation of this pair of candelabra coincided with the fascination for Far Eastern culture, which significantly developed in the West from around the middle of the 17th century. From the beginning of the 17th century, French connoisseurs turn out to be avid collectors of works of arts from the Extreme-Orient. The level of demand for Chinese porcelain in France is so intense that The Duchess of Cleveland, Charles II’s mistress, sold her collection in Paris in 1678.

This passion for oriental wares in France includes a predilection for figures and figural groups. Known as Pagodes or Magots – these two words are interchangeably used for images of Mortals and Immortals from the Far East, and are collected on their own or incorporated into larger objects.

In 1740, the trade card of another Merchant, Edmé François Gersaint, features a display of Pagoda figures of different size including an enormous example sitting on the top of an oriental lacquer cabinet. The design of Gersaint’s card is by Francois Boucher who incorporates Magots into a number of his pictures including the etching for Fire from the series on The Four Elements (1740).

Some idea of the value placed on these figures is shown by their inclusion in the sale catalogue of Louis XV’s secretary Jean Louis Gaignat (1697-1768) which occurs just after his death. A copy of the sale catalogue is illustrated by Gabriel de Saint Aubin (1724-1780) making it possible to visualise the lot sold. Magots and other oriental figures are amongst the earliest items to be copied in French Porcelain.

The discharge marks of the candelabra’s silver mounts suggest that the latest date for the porcelain figure is 1732, a date at which the manufactories at St Cloud and Chantilly for example, were producing oriental figures in white porcelain. Our two Magots originally held a stick in the hands that, in the Chinese model, was probably the handle of a Ruyi sceptre. A similar pair of figures, also in Blanc de Chine porcelain but from the kilns at Dehua in China, is still at Burghley house. It is recorded in the 1688 inventory as “1 Ball’d fryor sitting (in) my Ladys Dressing room”.

Relatively little porcelain with early 18th century French silver mounts, survive. This is probably more attributable to the change in taste towards ormolu from about 1740, than to the sumptuary laws which forced so much silver to the melting pot. The few pieces with silver mounts that remain tend to be simple shapes like beakers and bowls and almost never elaborate forms like these candelabra. The naturalistic treatment of the silver mount, shaped as a leafy branch, and the carving on the nozzles of typical examples are strikingly comparable to the candelabra offered in the sale.

An exhibition of objects from a similar period – La Fabrique du Luxe: Parisian Haberdasher Merchants in the 18th Century – is currently on display at Musée Cognacq-Jay, Paris, until January 27, 2019. 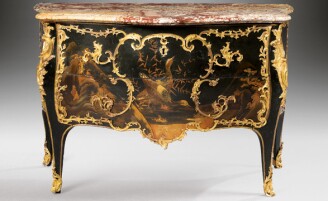