I f you ask a Chinese person about the cartoon character in the traditional “ma kua” attire with three buttons in front and a “half-melon” cap, they will all know exactly who you are talking about – everyone knows the iconic, Old Master Q.

“My life is like a comic series. I try my best to allow Old Master Q, hence myself, to perform all sorts of antics to amuse the readers.”

In the early 1960s, Alphonso Wong Ka-hei began his Old Master Q comic series. Using his eldest son’s Chinese name -Wong Chak - as his pen name, he enjoyed a meteoric rise to fame. Now-legendary characters, including Old Master Q, Big Potato, Mr. Chin and Miss Chan have been an integral part of many childhoods ever since. Depicting everyday realities, these characters have witnessed the social, cultural and technological development of Hong Kong since the 1960s. Old Master Q was so well-received that, in 1964, all copies of the first issue of the series were sold out within two hours. In 1995, Alphonso’s son, Professor Joseph Wong, took up the baton and founded the Old Master Q Company. Today, Old Master Q has been living in our hearts for over a half century; he is not only a symbol of Hong Kong culture, but also an enduring icon that encapsulates the collective memory of Hong Kong and the Chinese diaspora around the world.

In 2014, Sotheby’s showcased Alphonso Wong’s original works of “Old Master Q”, presenting the largest selling exhibition of the artist worldwide and celebrating with unprecedented attendance. This year, Old Master Q is coming back to Sotheby’s Hong Kong for its last public selling exhibition, “Old Master Q 2.0”. Alphonso Wong’s early colour covers and comic strips will be exhibited, allowing his vast audience to reminisce about the whimsical Old Master Q and the fond memories he has given us through the decades.

The selling exhibition will also showcase Old Master Q canvas works by Alphonso Wong’s son.. A year on from his father’s death, Professor Joseph Wong presents “Implications”, a series of original works which honour the memory of both the man and the icon. This series is particularly fascinating for its vibrant, colourful images, which are surreal and dreamlike, whilst remaining witty and imaginative. The convergence of two generations of Old Master Q’s legacy seen in these works will no doubt be keenly sought after by fans and art collectors alike.

Professor Wong is acutely aware of the role that Old Master Q’s loyal supporters have played in carrying this legend through the generations. To acknowledge these fans, he has decided to share his father’s precious original works with the public, including the second issue cover of Old Master Q - Rock’n Roll. The original artwork, which did not carry an issue number, was previously lost. Therefore, Rock’n Roll is the oldest existing draft of the comic cover. Professor Wong recalls that after his father watched an Elvis Presley film, he laughed and said "Elvis is like a comic-book character and rock is comic music.” Many years later, Professor Wong still feels greatly inspired by this interaction: the image of Old Master Q playing rock music representing his father's passion, while also giving him the energy to face challenges with vigour and hope.

“Ever since my father passed away, readers have been missing Old Master Q. I think the best way to give back, is to share my father’s precious original works with them in what will be the last public selling exhibition of his work.”

Old Master Q - Rock’n Roll will be offered through online-only auction from 1 to 10 August for public participation. This is without doubt the rarest work of Old Master Q and one that every collector will covet. The selling exhibition “Old Master Q 2.0” will be held from 10 to 25 August. Come and join Sotheby’s the summer in this celebration of Old Master Q. 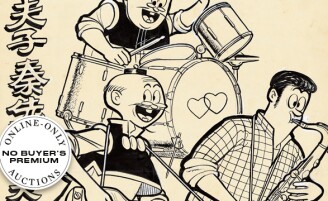